As previously stated, the ecological crisis is the result of humankind's uncontrolled economic expansion since the Industrial Revolution.  This led to overshoot in the 1950s as numerous environmental limits were violated.  The most serious of these violations were the skyrocketing GHG concentrations that produced today's climate and ocean emergencies.  My proposed response to the crisis thus begins with measures that address these disasters.  I then proceed to measures for tackling overshoot itself.

To be rational, a response to the GHG-based emergencies must meet three requirements: it must be fact-based, timely, and proportionate.

A fact-based response is one that is consistently scientific.  That is, it avoids the myths and misconceptions discussed in my previous posts.  This requirement applies with particular force to the emissions fallacy, which directs remedial action to present and future emissions while ignoring the concentrations produced by past emissions.  The simple antidote to this fatal error is to redefine the GHG goal from zero emissions to zero unsafe concentrations.

A response is timely when it proposes solutions that are effective well before a point of no return (PONR) is reached.  If degradation continues beyond this point, positive feedbacks will overwhelm human efforts and collapse will be inevitable.  Thus, before any solution can be seriously considered, we must specify the timeframe for the related PONR and ensure that the remedy can be successfully implemented within this restricted period.

To be proportionate, the scale of the response must match the scale of the problem.  Humankind has unwittingly geoengineered the planet for centuries to create the current crisis.  This was done by vastly expanding our populations and dramatically increasing our consumption levels.  It is preposterous to think that the resulting upsurge in environmental impact can be reversed through efficiency improvements alone.  If unintentional geoengineering got us into this mess, only intentional geoengineering can get us out.

To summarize, humankind must take the scientifically correct actions, within the ecologically available timeframes, at scales that are proportionate to the problems we face.  These are the criteria by which any emergency response, including the following, must be judged.

Because the climate and ocean emergencies were caused by rising GHG concentrations, the broad solution is to sharply reduce them.  However, we are facing a desperate situation in the Arctic, where melting ice and thawing permafrost could soon release enormous quantities of biosphere-destroying methane.  As indicated in the graph below, the necessary steps must therefore be implemented on a priority basis. 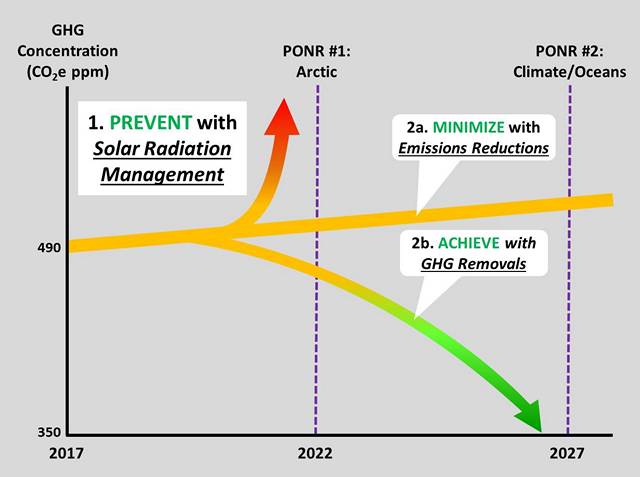 A note before I proceed: This graph differs from those in earlier posts in that the vertical axis represents GHGs in general rather than CO2 specifically.  I am now dealing with reality rather than principles, so the other GHGs must be considered as well.  Because of this shift, the vertical axis represents CO2-equivalent concentrations, which express the warming effect of all GHGs in terms of the CO2 concentration.  This number is currently 490 ppm, which means that the Earth is warming as if the CO2 concentration were 490 ppm instead of the actual 405 ppm.  Let me now address the graph itself.

The upward-sloping yellow line depicts the steadily rising atmospheric concentration of GHGs.  Our highest-priority task is to prevent this level from surging due to Arctic methane releases.  It is likely that tipping points have already been passed in this region, especially in the shallow Russian seas that lost their ice cover around 2005.  This largely unacknowledged event is now thawing the methane hydrates that are buried in the regional seabeds.  Because of this imminent peril, the time for an Arctic PONR has been set at 2022 - five years from now.   See PONR #1 in the diagram.

To prevent catastrophe, solar radiation management (SRM) must be immediately employed in the Arctic so that the methane threat is averted within the indicated timeframe.  This measure will hopefully restore the ice that formerly entombed the hydrates and prevent further thawing of the vast permafrost areas in Russia and Canada.  The ideal result would be the restoration of the Arctic ice sheet as a whole.  This would presumably return the polar vortex to its original tight loop and normalize today's extreme weather patterns.

Once the GHG concentration has been successfully prevented from surging upward, it must be quickly pushed downward until a safe level is reached. No-one really knows what this level is, so I have set the initial target at 350 ppm.  It should be kept in mind, however, that the pre-industrial level was between 280 and 300 ppm, so a return to this range may be necessary.  It is also unknown if tipping points have been reached in the ocean or climate system beyond the Arctic.  Given the rapid degradation in both areas, I assume that tipping points are near, with PONRs not far behind.  I have therefore set the initial PONR for the ocean and climate at 2027 - ten years from now.  See PONR #2 in the diagram.

Achieving this goal - 350 ppm within ten years - will require the aggressive implementation of two complementary measures: minimizing the concentration increase through emissions reductions and drawing CO2 from the air through carbon dioxide removal (CDR).  (Methods for methane removal are non-existent and will require intense research.)  I must underscore that these two measures are complementary in that neither can achieve the intended effect on its own.  Emissions reductions without CDR are pointless because they do not lower the CO2 concentration, and CDR without emissions reductions is ineffective because the CO2 influx will largely nullify removal efforts.

To summarize, my proposed response to the climate and ocean emergencies has two components.  The first is to immediately implement SRM in the Arctic so that the threat of catastrophic methane releases is removed within five years.  The second is to use a combination of aggressive emissions reductions and CDR to reduce the atmospheric GHG concentration to a safe level within ten years.  I believe this combination meets the stated criteria for rationality: it avoids the emissions fallacy and other scientific errors, it acknowledges the timeframes of the estimated PONRs, and it embraces geoengineering as the proportionate corrective to humankind's profound disruption of the natural world.

If the above emergency measures are successful, Arctic catastrophe will be averted, global warming will be minimized, and the oceans will eventually recover.  However, the root causes - economic expansion and ecological overshoot - will remain untouched.  This has two major implications.  First, the emergencies could reappear if our emissions and geoengineering efforts were to slacken, or if they are overwhelmed by rapid growth.  Second, removing excess GHGs does nothing to resolve the non-GHG aspects of overshoot, such as habitat destruction and chemical toxification.

To address these issues we must shift our attention from the natural realm, where the emergencies reside, to the social realm, where overshoot was born.  More specifically, we must consider the capitalist economy which generated the over-expansion that led to overshoot.  This is a major topic that will be extensively discussed in future posts.  Here I confine myself to identifying the key factors and making some preliminary observations.

Overshoot was caused by humankind's excessive environmental impact, and impact is driven by three factors: per-capita consumption, population, and efficiencies.  Consumption and population determine the economy's output rate, while efficiencies determine what impact this rate will have on the environment.  In principle, therefore, the solution to overshoot is straightforward: decrease the first two and increase the last.  This combination, when implemented to their maximum feasible extents, is here called rapid impact reduction.  See the diagram below. 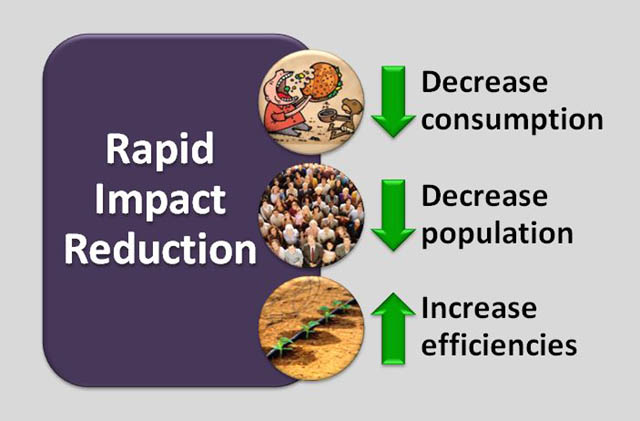 Decreased consumption is first on the list because this can be implemented quickly to reduce environmental impact.  If a rich country were to decide tomorrow that luxury consumption is obscene, this obscenity could be removed in short order.  Consumption is behavioral, so it is open to rapid alteration.  This is not true for lower population and higher efficiencies, which require structural changes in society and the economy.  The other important point is that reduced consumption applies to the rich rather than the poor.  The problem is not subsistence in hovels, but gluttony in mansions.

Decreased population is second on the list because this would result in huge impact reductions in the longer term.  For the diagram I have chosen a crowd of white people because this is the predominant color scheme of overconsumption.   An effective population control plan would focus on this privileged group and include two measures.  The first is legalized death with dignity for the old.  This is long overdue on ethical grounds and now has a compelling environmental rationale.  The second is more flexible family arrangements - for example permitting three or more adults to raise one or two children.  This would satisfy the human drive to procreate and nurture while minimizing the environmental burdens.

The third factor for reduced impact is higher efficiencies.  I place this last because capitalism is to some degree compatible with efficiency increases, so these have already been extensively implemented.  However, such improvements are restricted by the system's extreme profit orientation and are therefore well below the limits of technical feasibility.

If these three measures are aggressively employed, humankind's overall environmental impact will subside to a sustainable level.  This means that, while ecosystems could still be impacted by economic activities, they will not be seriously degraded.  Tipping points and PONRs will thus be removed from the list of human concerns.

Before signing off I must ensure that my critique of capitalism is not misconstrued.  The system is environmentally destructive not because of business, profits, or even growth, but because it employs these without rational oversight.  A sustainable economy may well feature all three, but it would regulate business, moderate profits, and control growth as dictated by environmental constraints.  Capitalism's dynamism and self-coordination can stay; what must go is its persistent ecological ignorance.

This post concludes the ecological part of my analysis.  I have identified the illusions that beset environmental thinkers, demonstrated the necessity of geoengineering, and proposed a plan for ecological survival.  Now comes the difficult part.  Given an entrenched capitalist economy and the powerful groups that defend it, how can this plan be implemented in the limited time available?  Developing an answer will take me well beyond the boundaries of conventional thought, so please be ready.  I will begin with power and politics, which are the critical factors in rapidly implementing the emergency measures.