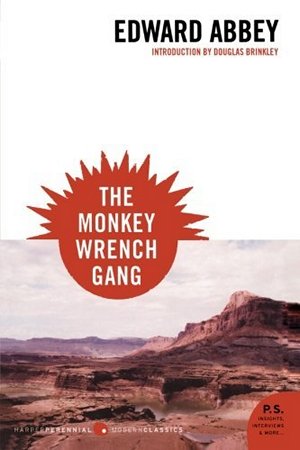 Abbey was a brilliant nonconformist who spent much of his life in the American Southwest.  This novel reflects his intense anger at the corporate destruction of the land he cherished: "Someone or something was changing things. ... Even the sky, that dome of delirious blue which he one had thought was out of reach, was becoming a dump for the gaseous garbage of the copper smelters, the filth that Kennecott, Anaconda, Phelps-Dodge, and American Smelting & Refining Co. were pumping through stacks into the public sky.  A smudge of poisoned air overhung his homeland."  (p. 16f)

The story follows a small band of pissed-off misfits as they sabotage the machines used to create this destruction.  Abbey's entertaining novel was the driving force behind the direct-action group Earth First!, and "radical environmentalism" generally.  A collection of my favorite quotes from the book is here.

Other Recommended Books on the Ecological Crisis

A Case for Climate Engineering