NEXT Politics Post:  The Existential Necessity of Military Intervention

In several of my previous posts, particularly Mainstream Emissions Reductions and The Deep Politics of Ecological Inaction, I explained that nothing of any significance is being done to resolve the ecological crisis. In this post I identify the core reason for this disastrous inaction: the decision by the ruling capitalist class to remain in power after its economic system became objectively obsolete about 60 years ago.

Capitalism began its ascendance in Europe around 1500 when technical conditions were ripe and an ambitious few seized the opportunity to rapidly expand production and consumption. At this time the global environment was relatively unspoiled and thus able to absorb the new economy's wastes.

Unfortunately this absorption capacity was strictly limited, and by the 1950s the atmosphere's CO2 concentration had shot above its long-term maximum of 300 ppm. This was the leading edge of ecological overshoot, signaling that economic expansion was starting to overwhelm the global environment. By the 1950s, in other words, capitalism had reached a historical dead end.  It could not continue without destroying the conditions for life on Earth and thus negating its own existence.

There is no question that the capitalist class was aware of the impending crisis.  Sporadic alarms were raised by scientists even during the 1950s, and in 1965 an advisory committee that included industry experts presented a comprehensive warning to US President Lyndon Johnson. This document, Restoring the Quality of our Environment, described a wide range of environmental problems, including air pollution, soil contamination, agricultural wastes, and rising CO2 levels. The report noted that these problems would inevitably escalate with economic growth, and it predicted that higher CO2 concentrations could cause a global temperature increase of 4ºC, resulting in a melting Antarctic ice cap, sea-level rise, and ocean warming. Thus, not only did Exxon know, everybody else did too.

This unprecedented development presented the capitalist class with a critical choice, as depicted in the diagram below: 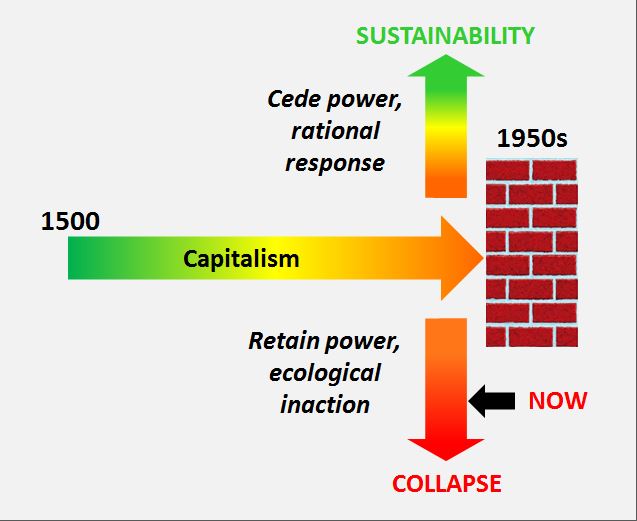 When capitalism hit the brick wall of natural limits, its ruling class could have ceded political power to a social force capable of moving the economy towards sustainability. If no such force was available, the class could have actively fostered its development.  As shown by the upward-pointing arrow, this would have led to effective actions such those outlined in my post, A Rational Response to the Ecological Crisis. The other option, as shown by the downward-pointing arrow, was to retain power, prolong the capitalist era, and avoid effective action on the environment. This choice would lead inevitably to ecological collapse.

The first option posed insuperable difficulties for the capitalists. Because they embody the system's expansionary logic, their turn towards a post-expansionary economy would have entailed a massive psychological adjustment. On the political front, surrendering power would have meant the loss of social domination and the associated reductions in status and prestige. As well, the exceptional privileges they enjoyed would have been curtailed, something that no powerful group voluntarily accepts.

Faced with these highly disagreeable prospects, the capitalists chose the second option. Although this implied a devastated biosphere and the likely extinction of humankind, it allowed this wealthy group to live out its remaining decades in the style to which it had become accustomed. Ecocide and self-immolation, it turns out, are no deterrents when power and luxury are at stake.

The capitalist choice obviously had far-reaching implications.  Most importantly, it abandoned the populace to a gruesome ecological fate. The primary responsibility of any ruling class is to ensure the survival of its people, and this responsibility has been decisively abdicated.  The trust we place in our rulers for effective action when disaster threatens is now completely unjustified. To put it metaphorically, our plane is plummeting to earth while our pilots, having accepted the inevitable, are draining the galley's liquor supplies.

As a key part of this abandonment, the capitalist class established an elaborate set of deceptions to mask the ecological decline and to conceal their inaction from the populace. These include:

There is another aspect of the capitalist choice that deserves attention. Although the ruling class and its supporters are united with respect to power retention and ecological inaction, they are split in their views of the ecological crisis itself. Some are - relatively speaking - realists who understand that a serious crisis exists, while others are deniers who defiantly reject this reality. This division has been skillfully exploited to sow further confusion among the environmentally concerned.

The trick is to focus attention on these two attitudes by pitting the realists against the deniers in public discussions. This obscures the fact that the realists are fully committed to the ecocidal choice, and it draws attention away from a rational solution. It's the classic "good cop/bad cop" ruse: the concerned support the good-cop realists (Michael Mann, the Guardian) and oppose the bad-cop deniers (Donald Trump, the Wall Street Journal) without ever realizing that both are prancing, hand-in-hand, down the path of ecological destruction. It's a well-worn stratagem that continues to be astonishingly effective.

To recap, capitalism reached a historical dead end in the 1950s when its relentless expansion encountered the Earth's environmental limits. Rather than transferring power to a sustainable group, the system's ruling class decided to retain control and ignore the escalating degradation, thereby leaving the people to suffer and die. To mask their abdication of responsibility they spun an elaborate web of distortions and lies. Society's intellectuals were rewarded for supporting this existential travesty, and they have shamefully complied.

This is where we stand today. In my next post I will explore what appears to be humankind's last chance for ecological survival: military intervention.

NEXT Politics Post:  The Existential Necessity of Military Intervention