A few years ago I listened to an interview with an insightful California activist named Saba Malik. As the mother of young children she was profoundly troubled by the escalating ecological crisis. She told the interviewer that, although she was involved in permaculture and other grassroots initiatives, "... everything is going the wrong way, so whatever we're doing isn't working, and we don't have much time left." Her key assertion was that popular initiatives must be linked to broader political struggles that acknowledge the nature of capitalism and the structure of political power.[1]

More recently, a regular contributor to the progressive website Common Dreams lamented the degradation of American politics and culture in the 14 years since 9/11.[2] Consistent with virtually every other contributor to this and similar sites, the writer embraced the official story of what happened that day. Nevertheless, the overwhelming majority of people who responded to the article severely criticized him for his political naivety.

From these and other indications I believe that a dissident stratum lies just below the surface of progressive orthodoxy. While most progressives seem content with the movement and its leaders, a significant number understand that they are being diverted from deeper ecological, economic, and political realities. They also realize that this diversion is blocking an effective solution to the ecological crisis. The dissidents likely remain within the movement because they are committed to its values of justice and sustainability, and because no alternative movement based on these values has yet appeared. In this post I examine a recent initiative arising from the progressive movement and highlight its fatal errors. I then urge dissidents who agree with my analysis to reject the movement's current leadership and to forge a new path to a just and sustainable future. 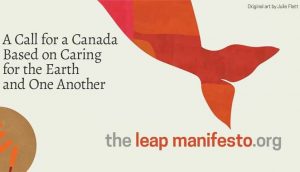 The reasons for a frustrated progressive minority can be explained in more detail by examining the Leap Manifesto. This is a declaration issued in September, 2015 by prominent Canadian progressives such as David Suzuki and Naomi Klein. It calls for a transformed economy that prevents catastrophic global warming and rectifies social injustices. These goals are to be achieved through the democratic process. After calling for town hall meetings to gather community input, the declaration asserts that, "Inevitably, this bottom-up revival will lead to a renewal of democracy at every level of government, working swiftly toward a system in which every vote counts and corporate money is removed from political campaigns."

Although the Manifesto clearly reflects genuine concerns, it cannot instigate the required systemic changes because it is blind to three core facts about our world. Because these facts are ignored, their theoretical and strategic implications are also overlooked.

The essence of the ecological crisis is overshoot, not global warming.

"Overshoot" refers to the concurrent violation of multiple environmental impact limits, not just global warming. The Manifesto's strong emphasis on the latter results in a fixation on energy issues, whereas the only realistic solution is much broader: rapid impact reduction. This entails not only clean energy and other efficiencies, but also sharp decreases in consumption and population levels. As in mainstream discussions, the Manifesto omits these critical requirements for a sustainable future.

The economic system at the root of the ecological crisis is growth-dependent capitalism.

Capitalism successfully replaced feudalism because it is a growth machine. It ruthlessly boosts productivity and ignores environmental limits in order to rapidly increase the economy's output rate. This can be beneficial under conditions of poverty and environmental integrity, but the system lacks a mechanism to change its behavior when either of these conditions no longer applies. Now that the ecological crisis is upon us, humankind is left with an inherently expansionary economy that is destroying the natural world.

This fact has both strategic and theoretical implications. On the strategic front, capitalism must be historically superseded by an economic system that can initially contract and then settle into a steady-state condition. However, this is not immediately possible because capitalist economies are guided by an internal logic that evolved over the past five centuries. This logic must be replaced, but there is no time for gradual evolution. This means that a new economic theory capable of rationally guiding a post-capitalist economy must be quickly developed. The Manifesto avoids the term "capitalism", allowing it to skirt the issues of growth-dependence, historical supersession, and economic theory.

A ruling class controls both society and the economy.

The conventional tale, which the Manifesto enthusiastically embraces[3], is that society is democratically controlled by the people through their government. The hard truth is that all complex societies have a ruling class, and that power in Canada and the other rich countries is held by a capitalist ruling class. Government is a representative institution that allows the populace to influence the ruling circles, but it is emphatically not the locus of political power.

The implication here is strategic and far-reaching. The required transition from an expansionary to a contractionary economy is a fundamental historical shift, not just a rearrangement of the social deck chairs. It therefore cannot be achieved through policy changes driven by pressures from below, as the Manifesto implies. Instead, the ruling class must be actively engaged - that is, the transition must to a large degree be a product of its own volition and motivations. Because the current ruling class is deeply expansionary and thus incapable of such volition, it must be either replaced or reconstituted. The central strategic choice is therefore between revolution and ruling-class transformation. This is a difficult decision that hinges on concrete circumstances, but it is unavoidable if the aim is to resolve rather than just mitigate the ecological crisis.

To summarize, the Leap Manifesto ignores core ecological, economic, and political facts, allowing it to evade the primary requirements for the transition to a sustainable world: the replacement or reconstitution of the capitalist class and the development of a post-capitalist economy in order to achieve rapid impact reduction. The Manifesto is a typical progressive statement from within a mystified bubble. As the dissidents no doubt understand, it is entirely inadequate to the objectives it seeks. 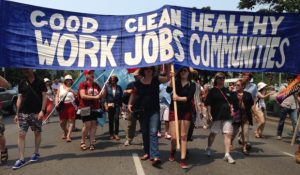 Before outlining my embryonic alternative, let me suggest two reasons why progressivism falters so badly when it addresses a systemic issue such as the ecological crisis. The first is that the movement arose for the purpose of resisting capitalism's destructive tendencies. As a resistance movement it can fight effectively for social and environmental reforms within the capitalist context, but it lacks the theory, strategy, vision, and leadership to transcend this context. Unfortunately, the ecological crisis requires humankind to do precisely that. Under these conditions, progressivism can do little more than present a list of high-minded demands and hope that these are interpreted as a workable strategy. 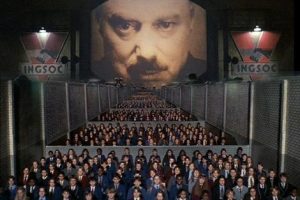 The second reason is somewhat more sinister. Any ruling class must control the populace it dominates. As George Orwell pointed out in Nineteen-eighty Four, for the majority (his "proles") this is straightforward: work them to exhaustion and give them cheap entertainment, lotteries, and beer. For those seeking to radically change or overthrow the system, however, some subtlety is required. Here the standard approach is to allow potential troublemakers to express their ideas and vent their anger within well-defined boundaries, and to divert their prospective actions into non-threatening channels. The Guardian newspaper, for example, sympathetically covers a wide range of social and environmental concerns, but scrupulously blocks all critiques and proposals that might lead to systemic change. The progressive movement, under its current leadership, plays the same diversionary role. 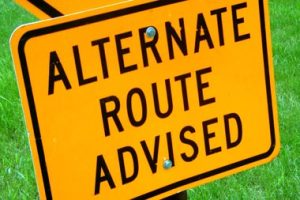 My proposed alternative to today's progressivism retains its commendable values, but fills the huge gaps in its understanding by offering a political framework, an economic theory, and a strategic approach. All three require further development, but they will hopefully serve as useful starting points for interested dissidents.

The political framework outlines the general principles of political power and then applies these to the structure of power in a capitalist society. I carefully distinguish between government, which represents the populace, and the state, which is the primary instrument of capitalist control. The progressive world invariably conflates these two entities, creating a conceptual muddle that precludes rational political thought. The framework defines democracy as the freedom of thought and action that the ruled have acquired within the ruler-ruled relationship. The standard interpretation of democracy as popular sovereignty is therefore rejected as the democratic illusion. These concepts are discussed in my Political Primer and in chapter 3 ("Power") of my book Contractionary Revolution.

My proposed economic theory is called the Economics of Needs and Limits, or ENL. ENL is based on an ethical principle that meshes with progressive values: all human beings, present and future, are of high and equal worth. This implies that the economy must maximize well-being, be equitable, and avoid violating environmental limits. It is important to understand that equity is built into the framework's principles and analytical tools. ENL's economic reasoning thus produces outcomes that automatically minimize the maldistribution of outputs and wastes. This means that key aspects of economic and environmental justice are inherent results, and do not have to be imposed on economic decisions after the fact. An overview of ENL is provided in An Introduction to ENL and in my book, The Economics of Needs and Limits.

My strategy involves the choice between revolution and ruling-class transformation, as noted above. I have concluded that revolution in the rich capitalist countries is unrealistic within the available timeframe, so my choice here is ruling-class transformation. The best chance of achieving this is three-fold. First, remind the ruling class of its historical responsibility to provide enlightened social guidance. Under current circumstances this mandates the shift to a contractionary economy. Second, demonstrate to this class that its true interests lie not with a short-term wealth grab before collapse, but with a long-term future in a sustainable world. And last, assure them that, although capitalism must be superseded because of its ecocidal expansionism, business will continue to flourish. 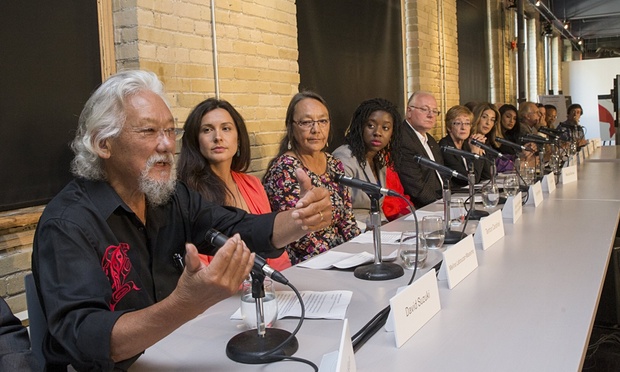 To conclude, I strongly urge all dissenting progressives to look closely at their movement and the alternative concepts provided here. If you truly want to resolve the ecological crisis, or if you feel that justice cannot be adequately achieved within capitalist constraints, the time has come to ditch Suzuki, Klein, and other progressive leaders. You could either leave the movement and create a new organization, or transform progressivism by installing new leaders who acknowledge the core facts and draw the appropriate theoretical and strategic conclusions.

One thing is certain: your aims cannot be realized within the movement as it currently stands. If you stay and do nothing, you are betraying the ethical commitments that you so passionately espouse.

[1] The interview was conducted by Ken Rose, but for unknown reasons is not available in his archives at http://whatnowsolutions.org. The quote is from my notes.  Saba Malik describes her posture in this brief video: https://www.youtube.com/watch?v=CVKLmRej6cA

[2] Tom Engelhardt, "Mantra for 9/11: Exceptional Pain Dispensed by the Indispensable Nation". This article was originally published on Sept. 8, 2015 at http://www.tomdispatch.com/blog/176041.

[3] This acceptance is explicit in the Manifesto's reliance on government and democracy, and implicit in its use of the pronoun "we" and related forms. There are actually two problems regarding the latter. The first is that "we" is used in reference to both the declaration's signatories and society as a whole, without any attempt to distinguish between the two. This is confusing, but appears to be simple sloppiness. Much more significant is that the social "we" erases the boundary between the ruling class and the populace it dominates. Most egregiously, the Manifesto refers to "our economy" - a formulation that magically places the economy in everyone's hands, thereby negating the fact of capitalist control.