NEXT Ecological Crisis Post:  Confessions of an Environmental Thought-Criminal

One of this website's core messages is that today's environmental initiatives are based on lies and errors, and therefore cannot solve or even moderate the ecological crisis.  Unless the falsehoods are quickly identified and corrected, humankind's civilized survival is highly unlikely.

Mainstream forces disseminate these lies for an obvious reason: they want to continue business as usual despite the ongoing ecological collapse.  Tragically, however, many of the lies have been adopted as authoritative truths by the environmentally concerned, most of whom are part of the progressive movement.  This acceptance is typically based on admirable values and good intentions, but innocent errors are still errors, and they are highly influential in blocking the rational crisis response.

This means that, despite the difference in motivations, mainstream lies and progressive errors must both be firmly rejected. The most critical of these falsehoods and my alternative statements are summarized in the table below. 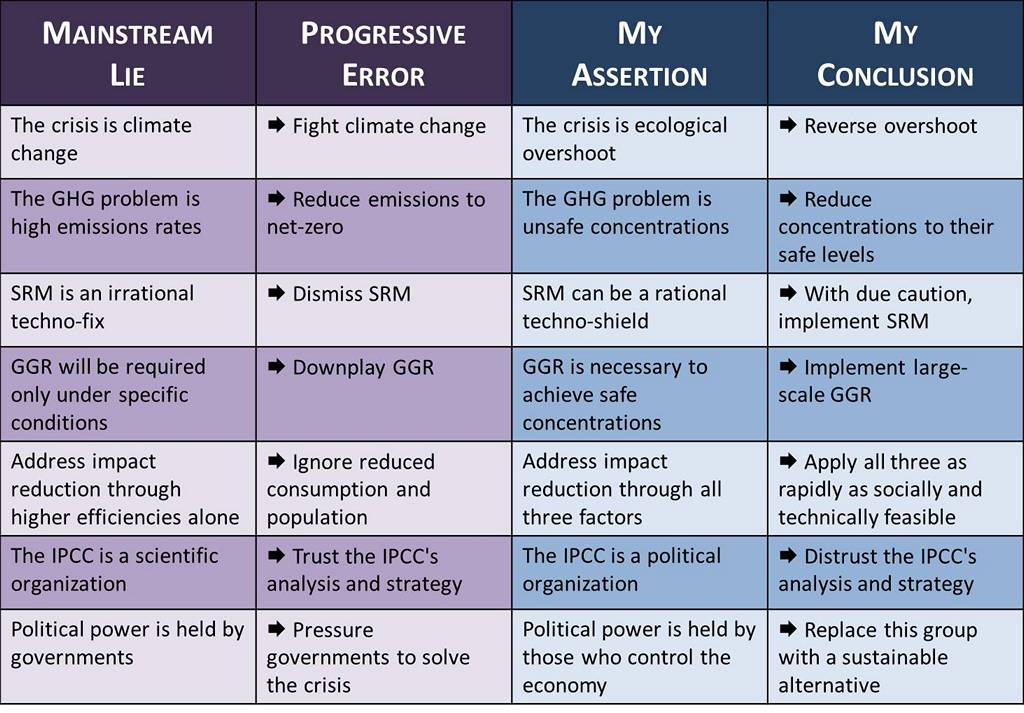 The mainstream lies are listed in the column at left.  In the second column are the errors made by progressives through their adoption of these lies.  The last two columns present my alternative assertions and strategic conclusions.  Note that the first four lies pertain to the GHG crisis, which is the most urgent aspect of our ecological predicament.  The last three address other critical topics: environmental impact in general, the sacred-cow IPCC, and the locus of political power.

The main use of the matrix can be illustrated by looking at the second lie: the mainstream claim that the GHG problem is high emission rates.  Progressives have fully embraced this falsehood, and have therefore adopted the goal of net-zero emissions.  My contrary claim is that the GHG problem is unsafe concentrations, and that the correct goal is therefore to reduce these to their safe levels.  Achieving this would include aggressive emissions reductions to avoid exacerbating the problem, but there would be no pretense that emissions are the problem itself.

My primary aim here is to introduce the above matrix as a handy summary of the environmental deceptions, but two important questions should be briefly addressed.

First, why would progressives adopt the mainstream's assertions when they presumably understand that this same mainstream is an ecocidal force?  The answer is that progressivism is inherently a reform movement - that is, it seeks to improve rather than transcend the prevailing social order.  It therefore accepts the environmental guidance of those who dominate this order.  Despite occasional bursts of anti-capitalist rhetoric, progressives have made their peace with the current system.  They therefore avoid the revolutionary change that is now an existential necessity.  Briefly stated, the movement lacks analytical and strategic independence.  Instead it succumbs to the fatal deceptions of society's growth-obsessed leaders.

The second question is how progressivism's submissive posture impacts solutions to the GHG crisis.  This is best answered by relating the movement to the IPCC.  As explained in the IPCC Critique series of posts found here, the IPCC is a political honeypot.  It attracts the environmentally concerned by acknowledging the GHG problems, but then steers them away from any solutions that could undermine capitalism or growth. Progressive environmentalists play the same bait-and-switch role: they beguile the concerned with brave words of resistance and change, but then direct them to the conventional, unworkable approaches.  Thus, like the IPCC, they neutralize precisely those who are most concerned about the crisis and who could therefore generate the greatest pressure to implement the rational response.

For brief descriptions of the falsehoods listed above, see the Youth Ecological Manifesto.  For more detailed discussions of the issues involved, see Ecological Survival and Revolutionary Change.

NEXT Ecological Crisis Post:  Confessions of an Environmental Thought-Criminal