The goal of net-zero emissions, which is now being peddled by everyone from politicians to progressives to the Pope, is a travesty and a betrayal.

It is a travesty because it will result in even higher greenhouse gas (GHG) concentrations than those currently ravaging critical Earth systems.  In a ludicrous departure from facts and logic, emissions are being treated as the problem itself.  They are in fact the increments to the problem of unsafe concentrations, so eliminating them will leave the accumulated GHGs completely untouched.

The goal is also a betrayal because it blatantly violates this international agreement, which commits the world to keeping concentrations within safe limits for present and future generations.  For the young this treachery should provoke their outraged rejection of the IPCC-based climate charade and their adoption of a militant stance to salvage their imperilled futures.

The truth is that the achievement of net-zero GHG emissions, while significant, is only a milestone on the road to safe concentrations.  To make this clear, have a look at the graph below, which depicts the combined impact of all GHGs in CO2-equivalent terms. 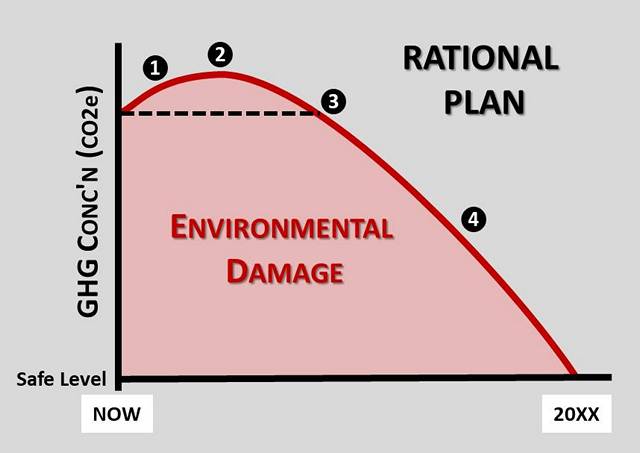 This is the approach implied by the cited agreement: reach the peak GHG concentration as soon as possible and then aggressively decrease this level until safety is reached.  On this journey there are four milestones, as indicated by the numbers.  Before proceeding I should point out that the end date of 20xx, which also applies to the graphs below, is non-specific because the exact year is less important than the principles involved.  As well, "net emissions" refers to the difference between GHGs entering the atmosphere (emissions) and those extracted by either technical means or natural processes (GHG removal or GGR).

Once this picture is presented - which is never done in IPCC and other mainstream documents - it becomes embarrassingly obvious that net-zero emissions leaves us with the highest GHG concentrations in human experience.  This is the penalty we are now paying for allowing the climate science establishment to replace the original concentrations focus with today's utterly nonsensical emissions fixation.  This is the rabbit hole we have entered in following our social leaders without independently assessing their environmental claims.

Why is the above plan rational?  Because it minimizes the area under the concentration curve, which represents the environmental damage caused by unsafe GHGs.  This minimization in turn reduces the likelihood that tipping points and points of no return will be encountered.  Any deviation from the above plan expands this area and thus increases the likelihood that today's ecological collapse will rapidly accelerate.

To make this plan more concrete, let me briefly describe the steps required to achieve it.  The above graph is repeated to highlight the crucial but widely suppressed fact that net-zero emissions and peak concentration are logically equivalent.  Net emissions have been disaggregated into emissions and GHG removals in order to reveal their distinct roles in the safe-concentration pathway. 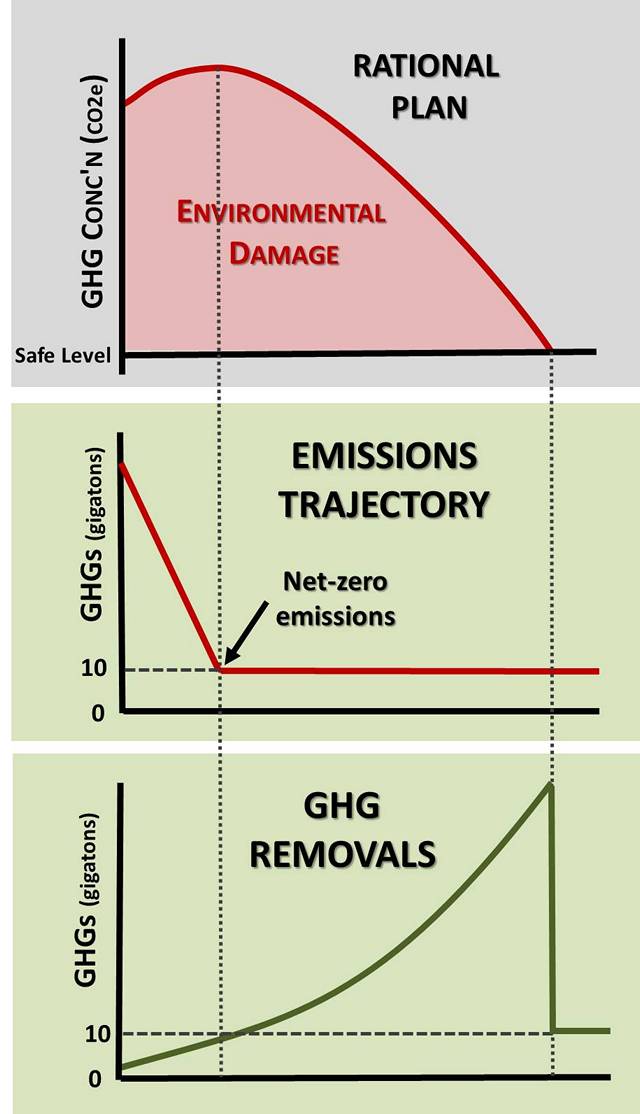 Although not depicted in figure 2, the indispensable first step is solar radiation management (SRM).*  This will reflect a small percentage of the Sun's radiation, thereby keeping the Earth's disastrous energy imbalance in check while the solutions are implemented.  SRM must continue to be employed until the danger of runaway global warming has been fully eliminated.

The first graph in figure 2 depicts the rational plan, as previously discussed.  As a reminder, the vertical axis is the aggregate GHG concentration level.  The second and third graphs show the solutions.  Here the vertical axes are GHG amounts, in gigatons.  Emissions and removals have been placed on separate graphs for clarity, but these could be combined for direct comparisons between the two quantities.

The emissions trajectory indicates an extremely rapid decrease until the minimum feasible rate is achieved.  Emissions then stabilize at this level.  The last graph shows that GHG removals increase exponentially as technical methods are urgently developed and implemented, and as natural processes are rapidly enhanced.  GGR must be employed at its maximum feasible intensity until the safe-concentration goal is reached, but can then be sharply reduced to match the remaining emission rates. The result would be net-zero unsafe concentrations.  This, not net-zero emissions, is the logical GHG goal.

The dotted line at left is an important demarcation.  Prior to this point in time emissions exceed removals, so the concentration goes up.  After this point removals exceed emissions, so the concentration goes down.  Because the two are equal at the line itself, this marks the achievement of both net-zero emissions and the peak concentration level.  I have chosen 10 Gt as the GHG amount that is emitted and removed, but this number could be higher or lower depending on the state of GGR development.

To maximize our chances of ecological survival, safe concentrations must be reached as quickly as humanly possible.  Because GGR methods are still immature - the tragic but inevitable result of decades of geoengineering denialism - much of the burden will initially fall on emission reductions.  These must therefore be implemented on a colossal scale and with unprecedented speed.

This in turn means that the three factors that determine emission rates - consumption levels, population levels, and GHG-related efficiencies - must all be exploited to their fullest extent.  The social reality behind these solutions is therefore truly fundamental change: drastic cuts in rich-world consumption and population levels, efficiency improvements to the limits of technical feasibility, and the political and economic transformations required to implement these radical steps.

Another important conclusion is that GHG emissions are not intrinsically damaging to the environment.  If they are emitted while concentrations are and remain below their safe levels, they will be harmlessly absorbed.  Emissions are damaging only when they create or increase unsafe GHG concentrations.  This underscores the fact that a return to the original focus on concentrations is long overdue.

Let's be optimistic and assume that the above measures are implemented at the necessary scale and speed, that we're lucky with respect to tipping points and points of no return, and that humankind therefore survives the GHG crisis in some kind of civilized condition.  How might our relationship with GHGs evolve over the long term?

In the above example GHG safety is maintained after the safe concentration level is reached by removing the 10 Gt of annual emissions.  It might seem that this situation can continue indefinitely.  Future humankind could emit what it can't avoid emitting, and could sequester any GHGs not absorbed by natural processes or used to manufacture carbon-containing products.  However, the Earth likely has a limited capacity for GHG sequestration.  The natural formations where these gases can be safely stored are scarce, and keeping them there in perpetuity can be challenging.  It is therefore possible that the planet's sequestration limit will soon be encountered.  If this turns out to be true, our future with respect to GHGs will play out in three historical stages:

Many environmental thinkers believe that a degraded Earth will support no more than one or two billion people, living materially modest lives.  This intuition is consistent with the last of these three stages: global levels of consumption, population, and efficiencies that produce only those GHGs that can be removed from the atmosphere or used to manufacture a limited range of economic outputs.