As stated in Ecological Survival and Revolutionary Change, humankind must quickly shift from capitalism to a sustainable economy under the guidance of a conceptual framework such as ENL.  Because this shift is central to our ecological survival, I would like to probe it more deeply by examining the economic logic that underlies each system.  This term refers to the factors that drive an economy's allocation decisions, its distribution patterns, and its production and consumption activities.  The economic logic of capitalism is depicted in the figure below. 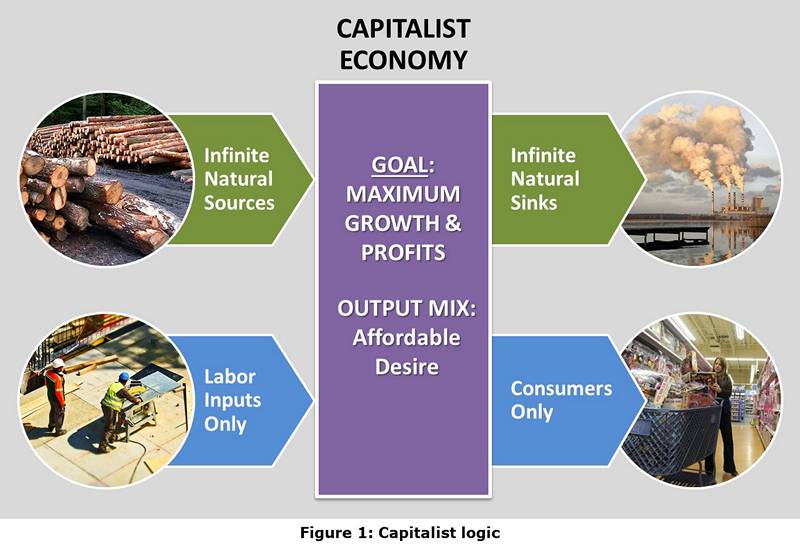 There are six factors in all.  The most important of these is the profit-driven goal of maximum economic growth.  Supporting this goal are two ecological factors: the assumptions of infinite natural sources and infinite natural sinks.  Also supporting the goal are three social factors.  First, workers are treated exclusively as labor inputs, as opposed to human beings who provide labor.  Second, the populace is treated exclusively as consumers, as opposed to human beings who consume.  Third, the economy's output mix (the types and quantities of outputs produced) is determined by affordable desire - that is, consumption desires that are backed by the purchasing power of money.

The significance of the logic's goal and two environmental assumptions is that they are responsible for ecological overshoot and thus the crisis we face today.  The environment is far from limitless, and economic growth is justified only if it sustainably improves well-being.  However, this also implies that the logic is rational under specific conditions.  If natural sources are abundant, natural sinks are largely intact, and people are suffering in poverty, capitalist logic is probably the most effective way to improve their lives.  Thus, based on the ecological factors, the problem is not capitalist logic per se but rather its continued application when these conditions no longer apply.

The significance of the logic's three social factors is that they degrade the populace.  Treating workers exclusively as labor inputs ignores the effects of labor on their health and life enjoyment.  Examples are automation that robs them of skills and creativity, and work intensification that leaves them exhausted and accident-prone.  Treating the populace exclusively as consumers ignores the effects of consumption on their lives.  Some consumption enhances health or provides enjoyment, but other consumption causes substantial harm.  Finally, determining an economy's output mix through affordable desire means that production will be heavily skewed towards the wants of rich while marginalizing the needs of the poor.

Based on this clarification of capitalist logic, several important points can be made:

NOTE: Although they are distinct, state and government are consistently conflated.  The term "state" refers to the institutions and organizations authorized by social leaders to maintain public order and regulate social functioning.  "Government" refers to the elected politicians who represent the populace's views and concerns.  Based on its delegated authority, the state - which is typically disguised as "government agencies," "the civil service," or "the bureaucracy" - is dominant.  The capitalist state will therefore dilute or ignore any government initiatives that seriously conflict with capitalist ends.

The above model can also be used to depict ENL's economic logic.  See the figure below. 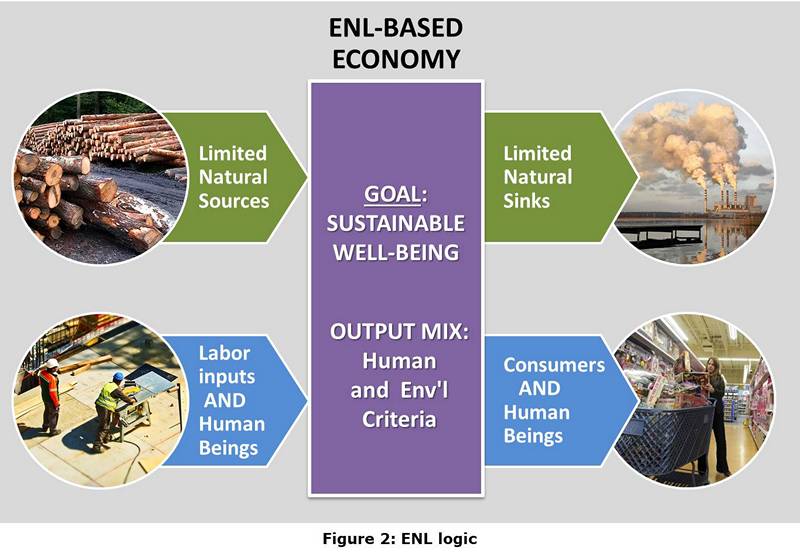 Turning to the social factors, ENL logic treats workers as both labor inputs and human beings.  As labor inputs they are commodities in a labor market, as under capitalism.  As human beings their well-being must be maximized.  Thus, when a new machine is being considered to increase labor productivity, an ENL analyst would examine not just the increased output rate, but also the effects of the modified labor process on the affected workers.  If the overall results are negative, the machine would be economically irrational and would therefore be rejected.

ENL logic treats the populace in similar fashion: they are both consumers and human beings.  As consumers they are markets for the economy's outputs, as under capitalism.  As human beings their well-being must again be maximized.  This means that economic decisions must take into account both the health effects of consumption and its impacts on life enjoyment.

The first pertains to the word "industrial".  Much concern has been expressed about today's industrial modes of resource-related production: industrial agriculture, industrial forestry, etc.  However, this word simply refers to a set of technologies and methods.  These could be applied sustainably for human benefit, or unsustainably for maximum growth and profits.  For example, industrial agriculture has become extremely destructive under capitalist logic because of its extensive use of mechanization, monocultures, and pesticides.  Under ENL logic these factors would be strictly limited or entirely avoided based on environmental and human considerations.  The more accurate terms for these production activities are therefore "capitalist agriculture", "capitalist forestry", etc.  If the conventional terms are used, as is done in this document because of their familiarity, we must remember that behind the neutral word "industrial" lurk the perils of capitalism's destructive logic.

My second point is a tragic but inescapable fact: capitalist logic is consistent with humankind's biological nature, but ENL logic is not.  As biological creatures we strive to increase our consumption, swell our numbers, and expand our territory.  These are precisely what capitalist logic supports.  ENL logic, by contrast, compels us to severely restrain all these drives.  Its implementation in a post-capitalist economy will therefore make unprecedented ethical and lifestyle demands of our species.  Humankind's ecological survival largely depends on our capacity and willingness to meet these non-biological imperatives.