As explained in my last post, about half a century ago the capitalist class refused to cede political power when its economic system encountered the Earth's environmental limits.  Instead it decided to continue its rule and to conceal the biosphere's rapid degradation, thereby abandoning the populace to a gruesome ecological fate.

This decision was the most flagrant abdication of responsibility in history.  Never before has a ruling class sacrificed both its own people and the environment to its narrow interests.  Given its ecocidal economy and this self-serving behavior, the capitalist class must be removed from power and replaced with a ruling group that will decisively tackle the ecological crisis.  Any other approach is a cowardly submission to the prevailing order and an abject surrender to environmental collapse.

Which social entity could achieve this fundamental shift in the brief time available?  An examination of the social landscape reveals an absence of qualified candidates:

The painful truth is that the entire civilian world has failed to meet humankind's environmental challenge.  The sole remaining possibility lies in the non-civilian world: the military.  As discussed here, only this state component has the means of coercion, the organization, the discipline, and potentially the will to replace the current rulers.  This is truly our last chance, so let me describe how military intervention might work.

The main thing to understand is that the intervention I envisage is not intended to achieve lasting military power, but rather to transfer power from one civilian group to another.  Unfortunately this shift cannot take place immediately because no civilian group is currently prepared to assume social and environmental leadership.  However, any delay in tackling the climate and ocean emergencies could be fatal.  The military must therefore assume power temporarily in order to initiate environmental action and to give a sustainable group the time it needs to form and mature.  As soon as this process is complete the return to civilian power can occur.

In brief, military intervention is needed to bridge the temporal gap between the removal of the capitalist class and the full development of a sustainable ruling group.  It is a stopgap, not a permanent solution.

Once the military has seized control of the nation's key centers of power, authority, and influence it will immediately initiate the geoengineering projects required to restore the Earth's energy balance.  These actions will hopefully avert the impending climate and ocean catastrophes.  The military will then proceed to the more difficult and longer-term process of decreasing the economy's environmental impact to a sustainable level.  This will entail reduced consumption, increased efficiencies, and a decline in population.  These steps are discussed here.

The military's guiding principle in restructuring the economy will be minimal effective change.  This means that the capitalist system will be modified only to the extent necessary for sustainability.  Based on this principle, business will be a prominent feature of the new economy.  The environmental scourge is not private economic ownership, but rather the irrational expansion of economic activities demanded by capitalist logic.  If business leaders can adapt to environmental constraints they will be permitted to produce much of the economy's reduced output for profit.

Protecting the people is the core rationale for military intervention, so popular interests will be faithfully served as these events unfold.  A major concern is the loss of employment as the economy contracts.  The military will therefore ensure that the remaining work opportunities are fairly distributed and that workers receive an adequate income stream if they are temporarily unemployed.  Note also that economic growth will no longer be available to mask excessive inequality.  The military will thus be compelled to improve economic equity in order to maintain social stability.  This is an important point: a stable sustainable society is by necessity more equitable that a stable capitalist society.

The exact nature of military intervention will vary with circumstances, so this broad description must suffice.  A few concrete details are provided in this proposed public statement by the United States military to explain its seizure of power in that country. 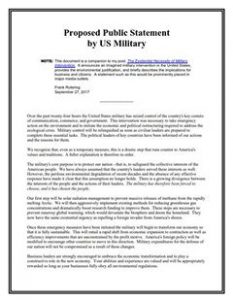 More important than the exact nature of military intervention is its justification.  Thus far I have focused on the irresponsible decision of the capitalist class, but there are several other reasons to support this momentous act.

First, recall that the military frequently provides humanitarian aid during natural disasters and other emergencies.  After a hurricane or earthquake no-one objects when military personnel are dispatched to save lives, distribute food and water, or prevent looting.  Now that humankind is facing one of the greatest disasters imaginable, it would be illogical and perverse to forgo military assistance.

Second, the military is currently loyal to the capitalist class, and could easily be persuaded to support a fascist takeover if the populace rebels during ecological decline.  The intervention I propose would be part of a shift in military loyalties away from the capitalists and towards the people, thereby preventing a political upheaval of this kind.  Such a reoriented military would also be far more likely than the current version to act humanely in foreign affairs.

The third reason to support military intervention relates to the current historical juncture.  In a period when the ruling class is serving the people's interests, such intervention would be a tragic disruption of social life.  But we don't live in such a period.  For over fifty years we have lived in a world where the rulers have abandoned the people to an environmental nightmare.  At such a time, and under such circumstances, the tragedy would instead be the absence of military intervention.

Fourth, the rapid military implementation of an effective ecological response may be the only way to prevent nuclear war.  Even if we ignore the current confrontation between Donald Trump and North Korea, international tensions will undoubtedly soar as glaciers melt, sea levels rise, and forests burn.  Substantial progress towards a livable environment would be a major contribution to nuclear sanity.

To summarize, the civilian world has unequivocally shown that it cannot rationally address the ecological crisis.  This leaves military intervention as the only remaining option.  In key countries the military must therefore seize political power, tackle the environmental emergencies, initiate the shift to a sustainable economy, foster the development of a sustainable ruling group, and transfer power to this group once it is sufficiently mature.  This authoritarian transition, while deeply regrettable, is now an existential necessity.