In the months leading up to the UN climate change conference in Paris this December there will likely be increasing chatter about emission targets - the percentage decrease in greenhouse gas (GHG) emissions that must be achieved by a specified date. The most ambitious of these may well appear to be serious attempts to address the crisis of global warming.[1] For example, the Union of Concerned Scientists (UCS) has said that the world’s industrialized nations must reduce their emissions an average of 70 to 80 percent below 2000 levels by 2050.[2]  [REMOVE THIS FOOTNOTE REFERENCE] 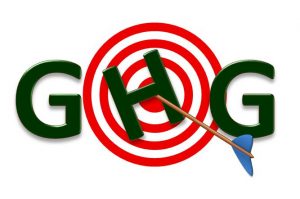 Although such targets sound plausible, they are based on faulty thinking and highly restrictive assumptions. The underlying purpose of emission targets is not to solve an existential problem, but to prevent the consideration of measures that, while absolutely necessary, would disrupt the prevailing order of power and privilege. Emission targets must be quickly exposed, repudiated, and replaced by the approach outlined at the end of this post.

There are two well-known reasons to question the validity of emission targets: scientific uncertainty and political interference. In recent years the uncertainty has been underscored to the point of embarrassment. Some reports indicate that Antarctic ice is melting a full century ahead of early IPCC predictions. There is currently a huge "blob" of water in the North Pacific that is 1 - 4º C warmer than normal. This blob is implicated in the intense droughts currently afflicting western North America, and no-one is really sure why it's there. Given such shocking and unanticipated events, it seems little more than an act of faith to propose emission targets for the decades ahead.

This unavoidable uncertainty is greatly exacerbated by political pressures on both scientists and climate negotiators. The IPCC process allows scientific conclusions to be extensively remolded by state representatives. Climate researcher Oliver Geden has charged that scientists have been strong-armed into modifying their models and assumptions to support the pretense that global warming can still be limited to 2º C. And according to climate activist Alex Scrivener, many climate negotiators have experienced bullying, bribery, threats, and espionage by the rich countries so that the latter can continue their climate destruction.

Despite these impediments to meaningful emission targets, the argument is repeatedly made that they are indispensable for guiding climate policies. Without targets, it is claimed, there is no way to determine when to close coal-based power plants, how aggressively to switch from fossil fuels to renewables, or how to set levels for carbon taxes. This fall-back argument is fallacious, and without it the case for emission targets completely evaporates. A mundane example will illustrate why targets are the wrong approach not only for scientific and political reasons, but for conceptual reasons as well.

Imagine that a blizzard is pounding your area and several feet of snow have accumulated on your roof. Things get frightening when you hear creaking sounds. How do you respond? One approach is to estimate when the roof will collapse and how long it might take you to clear the snow. If the clearing can be done before collapse occurs, you could do the job yourself. Another approach makes far more sense. Since you don't really know when the roof will cave in, you could round up some friends, attack different parts of the roof simultaneously, and get the snow cleared as quickly as possible.

The point is that, in an urgent situation, the most rational approach is to act as quickly as reasonably possible. Given life's uncertainties and the possibility of dire consequences, it makes no sense to establish a target such as the time of roof collapse. This is obvious and describes the way most of us behave. When it comes to global warming, however, this common-sense approach is completely ignored. Here the method used is to establish a purportedly safe amount of warming and then to calculate target dates and rates for reduced emissions. In the personal realm this kind of behavior might earn you the derision of your spouse and cost you a roof. In a rapidly warming world it could trigger a runaway process that destroys much of the biosphere. It is therefore critical to explore what lies behind this irrationality.

What is really going on when you decide to clear snow by yourself rather than asking for help? You might not have any available friends, or you might decide that they don't owe you any favors. In other words, you have fears or concerns that cause you to place restrictions on your choice; you therefore refuse to consider what might be the optimal course of action. Something very similar is happening with respect to global warming.

The rational approach to curtailing greenhouse gases is to apply these three measures to the maximum feasible degree. That is, consumption and population should decrease as fast as possible without violating ethical norms or causing social instability, and efficiencies should increase as fast as technically achievable. This is far removed from the current approach. Decreasing population is rarely mentioned, and reducing consumption is completely off the table. The focus is on clean energy, possibly augmented by warnings about altered land use. This strongly indicates that there are "fears or concerns" that restrict the options being considered. What are these?

The hard truth about the global economy is that it is dominated by capitalism, which is dependent on growth for its survival. Under this system, reducing consumption and population is a recipe for economic crisis and plummeting profits. These measures have therefore been placed beyond the boundary of polite discussion. Higher efficiencies, on the other hand, are to some degree compatible with capitalist logic. This measure has thus been chosen as the predominant means for lowering GHG emissions. Like a homeowner shoveling snow alone, those who control the global economy have dismissed the other key measures required to minimize global warming. They have concentrated public attention on energy efficiencies, which cannot conceivably achieve the desired result.

Emission targets serve the powerful by concealing this highly restrictive approach. In the example cited above, the UCS tells us that an 80% decrease in emissions over the next 35 years should limit the global temperature increase to 2º C. It is only at the end of the document that we discover the narrow basis for this assertion: "Many solutions are already available, including greater energy efficiency, increased use of renewable energy, and reductions in deforestation." The two most potent drivers for reduced emissions - lower consumption and population levels - are nowhere mentioned, let alone discussed. Had these concealed factors been part of the calculations, the UCS might have found that the 80% reduction could be achieved in 15 years rather than 35. Those additional 20 years could easily spell the difference between survivable global warming and an unlivable planet.

Why would an organization like the UCS, which has a well-informed and deeply concerned membership, limit its recommendations in this potentially ecocidal fashion? The question is especially vexing because the IPAT formula[3], which identifies the three impact factors mentioned above, is undoubtedly well-known to the 12 (out of 18) UCS board members who cite the environment in their bios. George Orwell addressed this question in Ninety-Eighty Four, and his answer was the mental process of "crimestop". This refers to the avoidance of "thoughtcrime" - the adoption of any thought or idea that has not been endorsed by those in power. Crimestop, which is of fundamental importance in the face of ecological collapse, is defined by Orwell as:

"... the faculty of stopping short, as though by instinct, at the threshold of any dangerous thought. It includes the power of not grasping analogies, of failing to perceive logical errors, of misunderstanding the simplest arguments if they are inimical to [the ruling ideology], and of being bored or repelled by any train of thought which is capable of leading in a heretical direction. Crimestop, in short, means protective stupidity."[4]

From this it appears that the authors of the UCS document mentally recoiled from decreased consumption and population, thereby restricting their proposal to energy measures and reduced deforestation. This behavior is understandable because the personal and professional penalties for thoughtcrime are severe. However, the biosphere is in peril, and "criminal" measures are the only way out. It is therefore essential that any proposal that restricts itself to permissible thought is identified as the product of internal censorship and branded as a perilous deceit.

On this website the comprehensive, rational approach to reduced emissions is called rapid impact reduction, or RIR. This is defined as the fastest socially feasible decreases in per-capita consumption and population combined with the fastest technically feasible increases in ecological efficiencies. To clarify this crucial concept, the relationship between emission targets and an RIR-based outcome is shown in the diagram below. 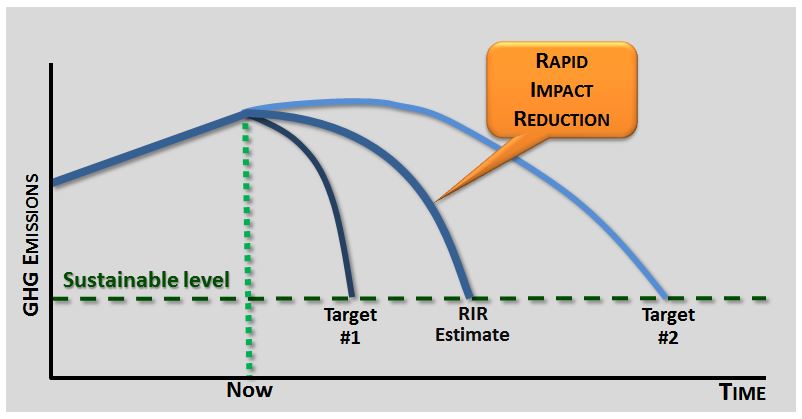 The curves depict the rise and fall of GHG emissions over time, until the sustainable level is reached. There are two target dates, based on different assumptions about the acceptable pace of lowered emissions. Between them is the date that RIR is estimated to achieve the sustainable level. Note that this is not a target, but rather the result of the three-pronged RIR process.  That is, the actions taken to reduce emissions are driven not by a specified endpoint, but by the maximum-feasibility criterion.

Target date #1 achieves sustainability faster than RIR, but this implies that the measures used are infeasible. That is, they are either socially unacceptable or based on unachievable technical advances. This approach must therefore be rejected. Target date #2 achieves sustainability more slowly than RIR. This increases the risk of catastrophic collapse, and must also be rejected. The optimal rate for reducing GHG emissions is the RIR-based decline. This reaches the sustainable level at a rate that balances the urgent and existential nature of global warming with the limits inherent in human beings, society, and technology.

The far-reaching economic and political implications of the RIR approach are explored in this website's documents. Here I would simply like to emphasize that the aggressive adoption of rapid impact reduction, not only for greenhouse gas emissions but for all environmental impacts, is the only way to preserve the biosphere for future generations and non-human species. Targets, by contrast, are based on restrictive assumptions that serve the powerful and lead irrevocably to environmental disaster. They must be categorically renounced.

[1] Global warming is the cause of climate change. In this post I refer exclusively to the cause rather than the effect. For a discussion of this topic, see The Three Most Dangerous Illusions.

[3] The IPAT formula was developed in the 1970s by Barry Commoner, Paul R. Ehrlich and John Holdren. It states that environmental impact (I) is a function of population (P), affluence or per-capita consumption (A), and technology or efficiency (T). The formula is an identity: I = (P * Q/P)/(Q/I) = I, where Q is output quantity and Q/I is efficiency. It serves to disaggregate the factors involved in impact, thereby allowing each to be subject to scrutiny and analysis.