The latest environmental warning from the scientific community correctly states that the fate of humankind now hangs in the balance.  But how did this happen?  How did a highly intelligent species, in full possession of the relevant facts, come to threaten its own existence?  In Ecological Survival and Revolutionary Change I offer a broad answer: humankind triggered ecological overshoot in the 1950s but then failed to respond in a rational manner.  Here I go further by addressing two critical issues: the evolved human characteristics that produced the overshoot event, and the factors underlying our inaction after it occurred.

To address the first issue it is necessary to critically examine the savannah hypothesis - the conventional account of humankind's origins in East Africa.  This states that, as the regional climate became cooler and dryer a few million years ago, several ape species left the dwindling forests, shifted from knuckle-walking to bipedalism, and started new lives on the sparsely-treed plains.  The struggle for survival among the dangerous creatures that shared this habitat sharpened our ancestors' wits and produced the tool-making, language, and culture that characterize our species - Homo sapiens.

This longstanding account has been strongly challenged in recent decades, most notably by paleoanthropologist Rick Potts in two books: Humanity's Descent (1996) and What Does It Mean To be Human? (2010).  For Potts, who directs the Human Origins Program at the Smithsonian Institution, the decisive factor in our development was not adaptation to a specific environment like the African savannah, but rather adaptation to the region's rapid environmental changes.  According to this variability hypothesis of human evolution we developed a highly flexible, general-purpose brain that could modify our immediate surroundings to maintain survivable conditions in the face of extreme environmental instability.  To make this important thesis more concrete, have a look at the figure below. 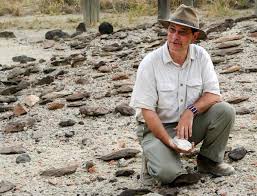 This graph depicts the major environmental changes in East Africa over the last 3.5 million years.  Moving up the vertical axis means that conditions are becoming cooler and wetter; moving down means they are becoming warmer and dryer.  There are two distinct evolutionary forces at play: a long-term trend towards a cooler and wetter environment (yellow line), and the sharp variations around this trend.  The savannah hypothesis assumes that the long-term trend is the only evolutionary force, and that the variations are inconsequential noise.  The variability hypothesis instead considers both signals, with the sharp variations playing the dominant role in humankind's early development.

This fairly recent proposal, which is increasingly supported by scientific evidence, clearly identifies the evolutionary roots of ecological overshoot.  Humankind's flexible and powerful brain permitted our adaptation to a wide range of conditions, and our biological drives impelled us to colonize the entire planet.  Because no evolutionary pressures exist to keep our impacts within the Earth's overall environmental limits, these played no role.   Given this rapid and heedless expansion, overshoot on a finite planet was the inevitable result.

The variability hypothesis is significant in three other ways.  First, it counters the frequent claim that humankind evolved to deal effectively with immediate threats - the proverbial tiger in the bush - but that we are incapable of dealing with slow-moving, long-term perils such as environmental degradation.  The new hypothesis by contrast indicates that our brains evolved not just to evade dangerous animals, but also to carefully consider the future, produce detailed plans, and act judiciously.  As Potts notes in this video (17:45), when our species originated about 280,000 years ago we were already capable of "complex thinking and planning".  This implies that, at least with respect to our mental abilities, we have the capacity to both cause and solve the crisis we face.

Second, the hypothesis accurately locates humankind within the natural realm.  Yes, we are deeply embedded within nature, but in a manner that differs decisively from all other species.  Ours is the only general-purpose, highly intelligent brain with the ability to fundamentally transform the global environment.  We are therefore a unique member of the animal kingdom.  This means that the idea of human exceptionalism, which is typically scorned by environment thinkers, is partly correct.

The variability hypothesis is also significant because it indicates that our adaptive flexibility is not boundless.  Our species evolved to deal with natural environmental variations, but not with those that have been massively amplified by our own actions.  It is thus likely that the speed and scale of these changes will soon overwhelm our evolved capabilities.  The clear implication is that we must do everything in our power to prevent or moderate them by quickly implementing the rational crisis response.

Let me now address the second issue: why did our species not use its impressive brainpower to respond rationally to overshoot after it occurred?  One reason for this self-destructive behavior is already clear: humankind's natural tendency is to follow its biological drives by increasing its consumption and population levels.  Reversing overshoot would have meant opposing this tendency and frustrating these drives.  Especially in the rich world, where the forbidden fruit of unsustainable consumption has long been standard fare, this reversal is strongly resisted.

Another key factor is the capitalist economy that arose several centuries ago to increase production and further satisfy our biological demands.  Because of this historical role, capitalism is a growth-dependent system.  Like those sharks that must swim constantly or die, it must expand without major interruptions or founder.  The dominant element in a capitalist society is the group that owns and controls the economy's major assets - its ruling class.  This group faced a vexing historical dilemma when overshoot occurred.

To appreciate the nature and depth of this dilemma, picture yourself as a guiding member of the capitalist class when overshoot was recognized in the mid-1960s.  You know that the system relies on continued growth for its health and stability.  However, scientists have warned you that ongoing expansion will further degrade the environment and lead inexorably to ecological disaster.  You therefore understand that, although growth must continue for economic reasons, it cannot continue for environmental reasons.  Given this clash between an irresistible force and an immovable object, how will you advise your fellow capitalists?

In considering this problem you will probably realize that capitalism has met a historical dead end. Two essential conditions for its existence - ample environmental sources and sinks - no longer exist.  The system you represent is thus objectively obsolete, and, if human well-being is the criterion, must be superseded as soon as possible.  For the members of your class, however, this is not the criterion to apply.  What matters to them are the political power they hold and the privileges they enjoy.

Based on this assessment, your guiding advice will likely be as follows.  First, continue with business as usual because this is the only way we can prolong our power and privileges.  Second, accept the inevitable consequences of this decision: ecological and social collapse leading to the dissolution of our economic system and the termination of our rule.  And third, strictly control the people so as to prevent any revolutionary upheavals that could imperil our last days of domination and affluence.

This reasoning, in some form, must have occupied capitalism's leading lights in the years following their recognition of the overshoot event.  It is also clear that their advice has been scrupulously followed: over the last five decades business as usual has grotesquely prevailed, economies have continued their ecocidal expansion, the super-rich have created various refuges to shield them from calamitous events, and the people have been extensively manipulated to purge them of any seditious thoughts.

To this point the answer to my initial question - why are we existentially threatened? - is two-fold: the unique evolution of our species and the decision by the capitalist class to reject the rational response.  There is also a third factor, which is now of critical importance: the people's passive response to this devastating decision.

As noted above, ecological overshoot occurred around 1950.  In 1965 a major report for the US government described exactly what was happening.  By the 1980s it was clear to informed minds that the report's conclusions were being ignored, which caused concerned scientists to frantically warn the world about the impending catastrophe.  We have therefore known for at least thirty years that ecological survival is possible only if the capitalist decision is reversed. We have nevertheless failed to take any meaningful steps to this end.

The core reasons for this passivity have already been identified: the material interests associated with our biological drives and the social control imposed by the capitalist class.  The new point here is that we have not resisted these forces for the sake of a sustainable future.  Rather than struggling to overcome our comforts and their control we have succumbed to the ecocidal realities of the prevailing order.  From this perspective the ultimate cause of the ecological crisis is neither biology not power, but the absence of effective will among the people.

To summarize, there are three primary reasons why we are existentially threatened.  The first is humankind's evolved attributes, which triggered the overshoot event.  The second is the conscious inaction of capitalism's ruling class after this occurred, which initiated global environmental damage.  The third is the people's failure to radically challenge this inaction, which produced today's ecological crisis and is therefore its proximate cause.