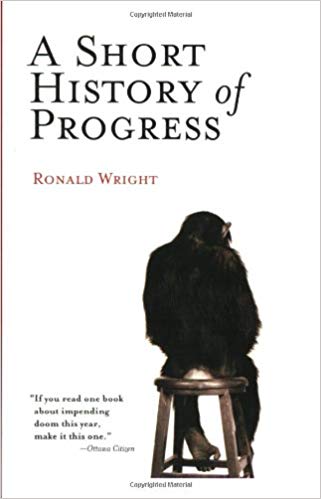 In this brief but highly readable book, Wright asserts that material progress is a trap that invites our species to over-expand, foul our environmental nests, and trigger an ecological crisis.  His most striking example is the Mayan civilization that dominated Central America until about 800 AD, when it overshot its local resources and collapsed.  Wright's summary statement applies with devastating accuracy to our current situation:

"As the crisis gathered, the response of the rulers was not to seek a new course, to cut back on royal and military expenditures, to put effort into land reclamation through terracing, or to encourage birth control ...  No, they dug in their heels and carried on doing what they had always done, only more so.  Their solution was higher pyramids, more power to the kings, harder work for the masses, [and] more foreign wars.  In modern terms, the Maya elite became extremists, or ultra-conservatives, squeezing the last drops of profit from nature and humanity."  (p. 102, emphasis added)