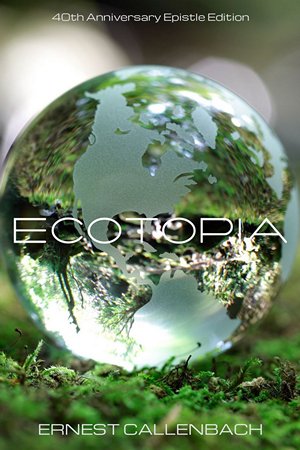 It is 20 years since Ecotopia - the territory occupied by Washington state, Oregon, and northern California - seceded from the United States because of the environmental crisis.  An American newspaper, the Times-Post, sends star reporter Willian Weston to the secretive new country on a fact-finding mission and to try to mend some diplomatic fences.  Callenbach perceptively describes Ecotopian society through Weston's reports.

Among Weston's findings are that the internal combustion engine has been banned, bicycles are everywhere, the economy has been radically decentralized, numerous environmentally-destructive outputs are no longer produced, the work-week has been reduced to 20 hours, and the people are highly emotional, sexual, and convivial.  However, some still smoke, and dangerous war games are played in order to neutralize, "the physical competitiveness that seemed to be inherent in [humankind's] biological programming."  (p. 80)

This is easily the most insightful account of a sustainable society I have ever read. The author understands both the ecological constraints that must be respected and the intractable aspects of human nature that must be tolerated and sublimated.  Those who find this book useful should also consider reading its prequel, Ecotopia Emerging (1981).