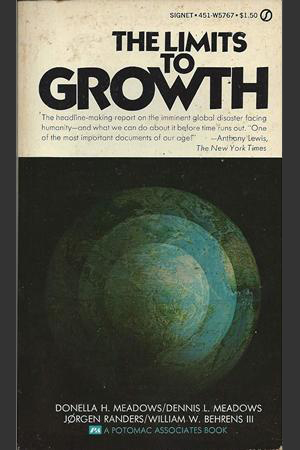 Should humankind survive the ecological crisis, future generations will look back on this book with the sad realization that we were unambiguously warned about the Earth's ecological constraints.  Limits to Growth uses rudimentary computer models to show that, "If present growth trends in world population, industrialization, pollution, food production, and resource depletion continue unchanged, the limits to growth on this planet will be reached sometime within the next one hundred years.  The most probable result will be a rather sudden and uncontrollable decline in both population and industrial capacity." (p. 29)

The book was viciously attacked both for questioning growth and for "predicting" resource exhaustion and environmental collapse.  The latter claim, however, was a blatant lie - an early instance of the numerous falsehoods that now degrade environmental discourse.  The authors repeatedly state that they are not making predictions, but only indicating, "... the general direction [that] our system, as it is currently structured, is taking us."  (p. 50)