NEXT Book Review: Anthropocene or Capitalocene? 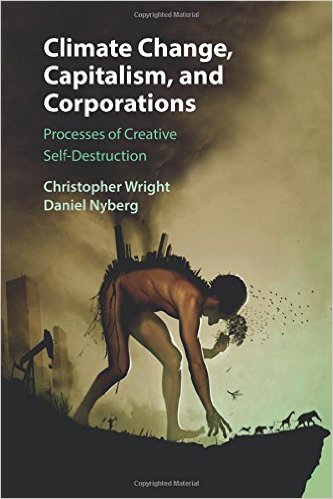 Christopher Wright and Daniel Nyberg are business-oriented academics who are both associated with the University of Sydney. Starting in 2008 they interviewed 70 employees at 25 Australian corporations to determine the corporate response to climate change. The resulting book reveals deep concerns among the interviewees and provides useful research on a topic that has to date been largely neglected. Unfortunately the authors stray well beyond their sphere of competence by offering strategic advice for addressing the ecological crisis. This advice is fatuous because it is based on a misinterpretation of the crisis and on egregious economic and political errors. 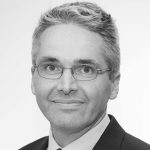 Roughly half the book is devoted to the authors' research findings. The most interesting of these are in chapter 3, which explains how corporations have converted the existential threat of climate change into standard risk management. This involves assigning monetary values to all important factors and then doing a cost-benefit analysis based on probabilities and consequences. The authors point out that, "Disciplines such as finance, economics, statistics, and accounting have professionalized this approach by codifying risks into calculable entities - among them insurance costs and credit ratings ...".[1] Four risk categories are discussed: physical risks such as extreme weather events, regulatory risks such as tightened product restrictions, market risks such as competitive "green" products, and reputational risks such as declining customer image. A disturbing revelation is that, armed with this "rationalized" approach, two-thirds of the surveyed corporations see climate change not as an environmental disaster but as a profit-making opportunity.

Chapter 4 confirms what has long been evident: corporations are split in their attitudes towards climate change. Some see the problem as an opportunity and engage in corporate environmentalism. This emphasizes innovation, technology, self-regulation, and marketization. Others see the problem as a business threat and engage in denialism by adopting a "fossil fuels forever" perspective. An encouraging finding is that not everyone in the first camp is a cynical opportunist: "From the late 1990s onwards, more moderate voices emerged to stress acceptance of climate change and the need for action."[2] Tragically, this attitude was seriously undermined by the global financial crisis of 2008. After this event, "The economic costs of climate change were re-emphasized. Denial of climate change found renewed favour in many Western democracies."[3] The chapter ends with a warning about the suppression of environmental activism and "... the unswerving complicity of governments in protecting corporations' economic interests."[4]

I found chapter 5 ("Justification, compromise, and corruption") to be of little value, but chapter 6 reveals how environmentally-concerned individuals fare within corporations. The authors divide these brave souls into three groups: rational managers, green change agents, and committed activists. As might be expected, employees in all three categories struggle to be heard amid the profit-obsessed cacophony. As well, most are treated as untrustworthy outsiders or tolerated as marginal eccentrics. This accurately reflects my own experience: it's tough being green while sitting in a corporate office or cubicle.

The book's remaining chapters lay out, in discursive fashion, the authors' analysis of the environmental crisis and their advice for addressing it. My criticisms here are numerous, so I will be selective.

Regarding the crisis itself, the existential challenge facing humankind is not climate change, but rather ecological overshoot. This refers to the violation of multiple environmental impact limits, not just those related to greenhouses gases. The current fixation on climate change is the result of a deliberate, long-term campaign to reduce the perceived scope of the imminent catastrophe. This was done partly to ease popular fears and thus to forestall political tensions. It also permitted the corporate "rationalization" described by the authors. Cost-benefit analysis may be feasible for a relatively narrow issue like climate change, but it would be impossible for the much broader and more complex overshoot issue. The authors' failure to accurately characterize the crisis and to recognize the motivations behind its distortion undermines their strategic counsel from the start.

On the economic front, the authors correctly assert that capitalism is growth-dependent, and that the system's relentless expansion is destroying both nature and civilization. From this point on, however, the errors come thick and fast.

The first problem is that the authors use a bewildering array of designations for the current economic system. To their credit, they do not shy away from the general term "capitalism". However, they also use specific terms such as "corporate capitalism", "market capitalism", "neoliberal capitalism", and "the industrial capitalist order". The result is that, when they talk about transforming "our economic system", it is impossible to know if they are talking about capitalism itself or about one of these variants. The authors use this ploy to evade a central strategic question: does sustainability imply that capitalism must be historically superseded, or will a reformed capitalism - such as one stripped of neoliberal fundamentalism - suffice?

The authors are deeply confused in blaming climate change on both the logic of the market and the logic of the system. To explain, market logic refers to the exchange of commodities based on their socially-determined values, whereas capitalist logic refers to the production of commodities based on profitability and growth. The ecological crisis is rooted in the latter, not the former. This point is critical because it means that, although a sustainable economy must renounce capitalism's expansionary logic, under appropriate constraints it can safely utilize the market mechanism.

Shifting to politics, the authors use the terms "government" and "state" interchangeably. Although this is standard practice in academia, it is blatantly incorrect. Government is a representative institution that allows the populace to express its concerns and interests. The state is a non-representative institution that regulates social functioning. Conflating the two is virtually universal because it masks the identity of the social group that ultimately does the regulating. This brings me to the authors' most significant misstep: concealing the locus of power in a capitalist society.

The conventional view, of course, is that power is democratically held by the people through their elected governments. The authors tweak this slightly by adopting the progressive perspective: corporations assert undue political influence, thereby undermining popular sovereignty.[5] Neither of these positions, however, allows for the possibility that a capitalist society is dominated by a ruling class. This concept is central to anthropological studies and at least some political theory, but it has been largely expunged from progressive and academic discourse.

The concept of a ruling class is fundamental because it determines the strategic direction for attempts to resolve the ecological crisis. If there is no ruling class, pressure must be exerted on governments through social movements and other means. If one does exist, it must either be replaced through revolution or transformed through methods that have not yet been seriously considered. The authors never address this critical issue directly. Instead they deny that climate inaction is due to, "... an elite conspiracy over a duped citizenry ...".[6] This is presumably a straw-man reference to a ruling class, but I can't be sure.

What the authors propose instead of this radical notion is that climate inaction is due to the "capitalist imaginary". This is an extremely vague form of social dominance where market solutions are seen as self-evident and corporations determine, "... the way the world is interpreted, lived, and understood."[7] The main source for this perspective is The Imaginary Institution of Society by the Greek-French thinker Cornelius Castoriadis. To give you some idea of this book's contents, here is the author's attempt to elucidate his core concept: "The imaginary of which I am speaking is not an image of. It is the unceasing and essentially undetermined (social-historical and psychical) creation of figures/forms/images, on the basis of which alone there can ever be a question of 'something'. What we call 'reality' and 'rationality' are its works."[8]

Outside the mystified halls of academe such pseudo-profound ramblings are known as bullshit. When this is added to the above errors, it is no wonder that the authors offer a fatuous strategy. Consider: despite insisting that climate change threatens "the very viability of life on Earth"[9] and that a solution must address "the very basis of our economic system"[10], their only proposals are "much-needed regulation"[11] and "a more direct and radical kind of democracy".[12] It should be clear to anyone of sound mind that these flaccid measures cannot conceivably resuscitate the dying biosphere. It should also be noted that the existence of a ruling class would strictly limit both regulatory and democratic initiatives, thereby nullifying the authors' suggestions. This is likely a key reason why the concept was deceptively dismissed.

[1] Christopher Wright and Daniel Nyberg, Climate Change, Capitalism, and Corporations: Processes of Creative Self-Destruction (Cambridge: Cambridge University Press, 2015), 51. For a look at the event that launched this book, see this YouTube video.

[5] The more general point with respect to corporations is that they are primarily economic rather than political entities. Although they have pervasive social influence as employers, advertisers, and producers, corporations do not exercise social control - the capacity to mold the popular mind based on a specific historical mission and worldview. Careful study has convinced me that this control is currently being asserted by the capitalist ruling class.

NEXT Book Review: Anthropocene or Capitalocene?