Last summer I announced that I was writing a book on my strategy for ecological survival.  In preparing for this task I carefully examined the current state of the crisis we face.  I was stunned to discover that the situation is far worse than I had thought, and that some of my long-held assumptions were no longer valid.   I therefore placed the book on hold and reassessed my environmental position.   Here I summarize my key findings.  In future posts I will explore the details.

The critical assumption I was forced to abandon is that a sharp decrease in humankind’s environmental impact would allow nature to heal itself and thus solve the crisis.  That is, I previously believed that our species had inflicted only a flesh wound on nature, whereas we have in fact inflicted a mortal wound.  Unless we intervene on a massive scale to repair the damage, the biosphere will continue its rapid degradation, thereby threatening complex life on Earth.

The clearest example is global warming.  The current atmospheric CO2 concentration is just over 400 ppm.  Assume that the safe level is 350 ppm, although it is likely much lower.  Even if humankind were to immediately eliminate all its CO2 emissions, the CO2 concentration would not decline to the safe level for centuries.  But that excess CO2, acting over time, is a mortal wound.  It is sufficient to melt polar ice, destroy glaciers, and devastate the oceans through warming, acidification, and deoxygenation.  The only way to prevent these catastrophes is to remove the dangerous CO2 from the air.  In other words, it’s no longer enough to stop doing what we’ve been doing, we must also undo what we’ve done. 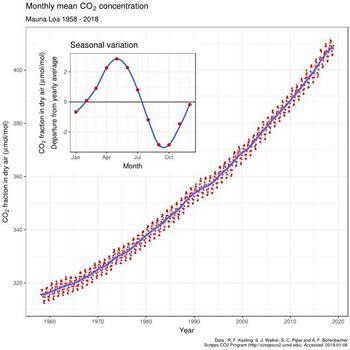 And the only one way to undo the harm our species has inflicted on the environment is an approach that has been widely demonized: geoengineering.  One of its components, solar radiation management (SRM), will be required to cool the Arctic and hopefully prevent major releases of methane that could cause runaway warming. The other, greenhouse gas (GHG) removals, will be needed to reduce the atmosphere’s stock of CO2 and the other GHGs.

Like many among the environmentally concerned I have long opposed SRM because of its potential dangers, and GHG removals because they reduce the incentive to curtail emissions.  At this juncture, however, such objections are of minor and diminishing significance.  The climate and ocean emergencies are now so advanced, and tipping points so near, that only these disruptive methods can prevent disaster.

The urgent need for geoengineering was quickly established once I took a closer look at the ecological crisis.  A far trickier problem was to identify the social force that might implement it within the brutal time constraints.  With few exceptions, the capitalist leadership and its supporters strongly oppose geoengineering.  The likely reason is that its adoption would reveal capitalism’s ecocidal role and historical obsolescence, thereby threatening power and privilege.  The liberal-progressive world also rejects geoengineering, based largely on the objections cited above.

The only social force I have found that has the capacity and potentially the will to rapidly implement geoengineering is the military.  For someone who has always seen the military in a negative light, this was a profound shock.  It nevertheless appears that, unless another qualified social force soon arises, military intervention will be necessary for human survival.

In my investigations I also found that a pervasive deception has been used to marginalize geoengineering. I call it the emissions fallacy: the idea that reducing our emissions is the solution to global warming and ocean degradation.  As indicated above, this blatantly ignores existing concentrations of GHGs.  For the atmosphere and oceans it is irrelevant whether emissions are reduced or existing gases are removed – all that matters are the GHG levels that result.  From this it follows that the rational goal for GHGs is not zero emissions, but zero unsafe concentrations.  Everything follows from this simple reframing.  I will have much more to say on this crucial topic in future posts.

A final revelation concerns humankind’s future.  If nature can heal itself, the extinction of our species would be a boon to life on Earth by removing our destructive impact.  If nature cannot do so, our continued presence will be required to reverse the damage we have caused.  As stated, nature cannot heal itself, so humankind’s disappearance would condemn millions of other species to the same fate.  Those who adopt a fatalistic attitude to our extinction typically ignore this gruesome implication.  Rather than capitulating, everyone who is concerned about the environment should fight tenaciously for both humankind’s survival and the geoengineering that only we can implement.