As discussed in previous posts, the supporters of business-as-usual (BAU) have used the IPCC to filter out any solutions to the GHG crisis that threaten economic expansion, thereby ensuring the organization’s environmental failure.  What must be explained now is why, despite this failure, the IPCC continues to be strongly supported by the environmentally concerned.  I believe there are two primary reasons: manipulations by the BAU supporters and the material interests of the global rich.  In this post I discuss the manipulations.

People are manipulated when they are unknowingly influenced for the benefit of another person or group.  Thus the lavish praise that is regularly bestowed on the IPCC – including the shared Nobel Peace Prize in 2007 – is a manipulation.  BAU supporters are influencing the public to admire the organization in order to mask its deceptions and safeguard economic growth.  Another manipulation is the Newspeak-like corruption of environmental terminology: climate scientists use an incoherent vocabulary that greatly complicates the search for meaningful solutions.

The most effective manipulations are those that borrow their techniques from the world of magic.  These techniques deceive virtually everyone because our bodies and minds, for evolutionary reasons, have developed vulnerabilities that can be readily exploited.  This exploitation can be done for entertainment, as in magic shows; for commercial gain, as in advertising; or for social influence, as in politics.

A book that reveals the methods used is Sleights of Mind: What the neuroscience of magic reveals about our everyday deceptions.  Written by two academic researchers, this is one of the most important contributions to our understanding of political manipulations since Edward Bernays’ Propaganda and George Orwell’s 1984.

The authors inform us that the human visual system and brain can be hacked in numerous ways, but that, “… one stands above all others in explaining the neurobiology of magic – the spotlight of attention.”  (p. 256, emphasis added)  If our gaze is diverted from one object to another, the first will become invisible.  If our attention is shifted from one idea to another, the first will fade into obscurity.  The BAU supporters have mastered these misdirections, particularly when it comes to ideas.

An important example of the latter is the shift in public attention from ecological overshoot to the GHG crisis (AKA “climate change”).  Today the concerned understand the perils of global warming and ocean degradation, but very few perceive that the underlying catastrophe is a biosphere that has been overwhelmed by economic over-expansion.

An even more striking example is the diversion from concentrations to emissions.  This should be a tough sell because the GHG problem is clearly excess concentrations, with emissions being only the marginal increases to this problem.  The task has nevertheless been achieved.  Public and scientific attention is now fixated on emission reductions, thus producing a bizarre but largely unnoticed reversal of environmental priorities.

How was this reversal accomplished?  One important trick was to make emission scenarios the IPCC’s primary analytical tool, thereby restricting its strategic thought to this realm.  Another was simple repetition.  In the key documents arising from the IPCC process the word “emissions” appears numerous times, but “concentrations” is almost totally absent.  To be specific, for the UNFCCC Agreement this ratio is 22-2; for the Kyoto Protocol it is 57-0; and for the Paris Agreement it is 25-0.  Overall, the ratio in these core documents is a stunning 104-2.  As the Sleights authors remind us, even the most illogical claims can be instilled in the mind, “… if assertions of truth are repeated often enough.”  (p. 112)

By far the most devastating manipulation is the one that has permitted the IPCC to reject the rational response to the GHG crisis while retaining the support of both the public and the scientific community.  This employs the good-cop/bad-cop tactic to achieve two major misdirections.  Before addressing the manipulation itself, let me present the politically dangerous situation faced by the BAU supporters prior to the IPCC’s creation:

At left is the BAU position with respect to the five possible solutions to the GHG crisis.  As indicated, all solutions are rejected except profitable efficiencies. Although this combination leads inevitably to ecological disaster, it is ideal from the BAU standpoint – hence the “score” of 100% – because it safeguards capitalism and growth while allowing efficiency-based profits.  Capitalism is protected by avoiding geoengineering (solar radiation management and GHG removals), while growth is protected by avoiding two of the impact reduction factors (reduced consumption and population).

The dire threat to this position is the rational response at right. This aims to resolve the GHG crisis by adopting all five solutions, thereby undermining the system and its continued expansion.  (Because profitable efficiencies are acceptable to all, there is a 10% overlap with the BAU position.)  Historian Spencer Weart was referring to precisely this kind of response when he noted that, in the pre-IPCC period, independent scientists seemed prepared to make “radical environmental pronouncements.” (The Discovery of Global Warming, p. 152)

In a nutshell, the pre-IPCC situation faced by the BAU supporters was that they held an unscientific and environmentally destructive position that could be easily refuted while a rational but profoundly threatening alternative might soon be proposed by concerned scientists.  The manipulation they developed to negate this threat was ingenious and reveals the subtlety of social control.

As noted, this manipulation is based on the good-cop/bad-cop tactic.  The idea here is that the manipulator replaces a choice between a favorable and an unfavorable option with a choice between two favorable options.  To clarify, in a police interrogation the suspect’s initial choice is between talking to the police alone and having a lawyer present.  Because a lawyer complicates matters for the police, they will seek to replace this choice with one between an antagonistic and a sympathetic cop.  Many suspects will trust the latter as they would a lawyer, thereby allowing the police free rein in the interrogation room.  The essence of this tactic is thus the creation of a false choice that benefits the manipulator.

The key to making this tactic work is the manufacture of credible bad and good cops.  In an interrogation this is straightforward: depending on their personalities and moods, the police temporarily assume these opposing roles.  For the BAU supporters, however, the challenge was considerably greater.  The party to be duped was not a single stressed suspect, but the numerous well-informed individuals who were deeply concerned about the escalating crisis.  This challenge was met by introducing two social forces: climate denial to play the bad cop and the IPCC to play the good cop.  The tactic and its BAU application therefore look like this:

At left we see the cops splitting into the bad and the good, with the bad cop representing the actual position of the police. This is indicated by the block arrow. Because the good cop diverts the suspect’s attention away from legal representation, the lawyer disappears from view. Thus, the suspect’s true choice – facing the police alone or calling a lawyer – is replaced by the false choice of dealing with the bad or good cop.

In the language of magic, the spotlight of our attention has been grossly misdirected. The concerned now talk fervently about climate denial, but the BAU position behind it has evaporated. And they now perceive the IPCC response as the enlightened alternative, thereby leaving the rational response completely out of the picture.

Let’s now see why this false choice is so favorable for the BAU supporters. The two options are depicted below. 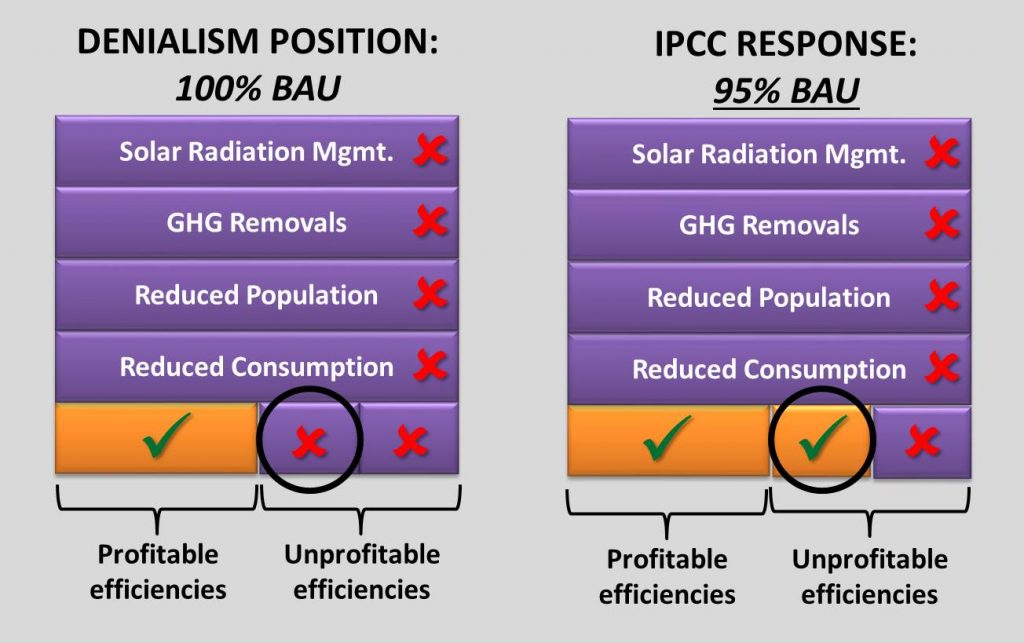 The diagram shows that denial rejects the two geoengineering methods, and the IPCC does the same.  As well, denial dismisses the need to reduce population and consumption levels, as does the IPCC.  It therefore turns out that the only difference between the two positions is with respect to efficiencies. Here denial rejects all those that are unprofitable, whereas the IPCC pushes for efficiencies even if these are moderately unprofitable.

Thus, when we examine the entire solutions space, the IPCC response to the GHG crisis is roughly 95% equivalent to the ideal BAU position.  This is the point of the manipulation: whereas the initial choice was between 100% BAU and 10% BAU, the choice now is between 100% BAU and 95% BAU.  Once these restricted options are integrated into the social fabric, the only possible loss for the BAU supporters is the occasional profit reduction from unwanted efficiency improvements.  This, however, is just the cost of doing expansionary business.

The IPCC-denial strategy works in part because the above choice involves two options that, in the relative sense, are distinct in their environmental virtue.  The IPCC is superior to denial because it recognizes the reality of the GHG crisis and is more aggressive regarding efficiencies.  This means that, when the concerned pick the IPCC from these two options, they are doing the right thing.  The tragedy is that, in absolute terms, both options are ecologically disastrous, thereby making this well-intended choice irrelevant to the future of the biosphere.

It is important to understand that the IPCC and denial are not separate historical developments, but rather two components of a single BAU manipulation.  Like twins, the two social forces were born a short time apart: the IPCC in 1988 and organized denial a year later (see Merchants of Doubt, p. 183).  As well, the two are highly interdependent.  Organized denial could not exist without the IPCC as its foil, and the IPCC would not be credible without denial to repudiate.  The latter is especially significant: without its evil twin the IPCC would be judged in absolute terms, and its 30-year failure to bend the Keeling curve downward would be mercilessly exposed.

Another critical point is that denial cannot be allowed to win.  Although it faithfully reflects the BAU position, it dismisses the science on which capitalist economies depend.  A successful denial would therefore saw off the branch on which the system is perched.  In addition, a continued assault on the empirically established facts would undermine the intellectual credibility of the BAU supporters.  Although many do reject these facts, they can’t be seen in this incriminating light.

Let me conclude by addressing an intriguing question: are scientists more resistant to the above manipulations than the general public?  Given their education and intelligence, one might think so, but the opposite is true.  For example, many scientists were deceived by Uri Geller’s purported spoon-bending a few decades ago.  To explain this, the Sleights authors quote computer scientist and amateur magician Danny Hillis: “The better the scientist, the easier it is to fool them.  Scientists are honest people.  They don’t know how low magicians will stoop and are not trained in deliberate deception.”  (p. 35, emphasis added)

Those who persist in believing that they’re too smart to be tricked should know that Hillis fooled even the brilliant physicist Richard Feynman, despite the fact that Feynman was fully aware that Hillis was trying to fool him.  This means that, with very few exceptions, all of us are vulnerable to clever manipulations such as the IPCC-denial strategy.  Only keen political awareness and active psychological resistance can moderate this malevolent control.