For those of us who are deeply concerned about the GHG crisis, an extremely useful YouTube channel is that of Peter Sinclair.  In his “Climate Denial Crock of the Week” series he calmly demolishes the cherry-picking, illogic, and plain stupidity of those who dismiss this mounting disaster.  He admirably achieves what his channel promises: “Knocking down the nonsense of Climate denial”.

Unfortunately, confirming that a problem exists doesn’t fix it.  To achieve this, the full range of available solutions – what the IPCC calls the “solutions space” – must be carefully examined in order to formulate a rational action plan.  Sinclair doesn’t do this.  Instead he fixates on energy renewables and efficiencies on the apparent assumption that these measures will suffice.

In proceeding in this manner he is following a well-trodden path.  The IPCC, the Potsdam Institute, most of the mainstream media, progressives, environmentalists, and many others have concluded that the crisis is real and serious, but all have jumped to the conclusion that improved efficiencies are the primary or only answer.  A comprehensive solutions analysis is universally omitted.

In this post I examine this standard approach.  One of my key conclusions is that, despite Sinclair’s usage, “climate denial” is a grossly misleading term.  It implies that there is a single form of denial with respect to the GHG crisis when there are in fact two: problem denial and solutions denial.  Sinclair, the IPCC, etc. effectively refute the first, but they are blind to the second.  This blindness, which prevents potential solutions from even being considered, is a major reason that the poles are now melting and the Keeling curve continues its skyward trajectory.

Solutions denial has escaped both public and scientific scrutiny in part because no broadly recognized conceptual tool exists for analyzing the solutions space for the GHG crisis.  To fill this gap I have been using a stack of the available options and then noting which are supported and rejected by the relevant parties.  I have not found a better alternative, so I will use this tool here as well.  The stack looks like this: 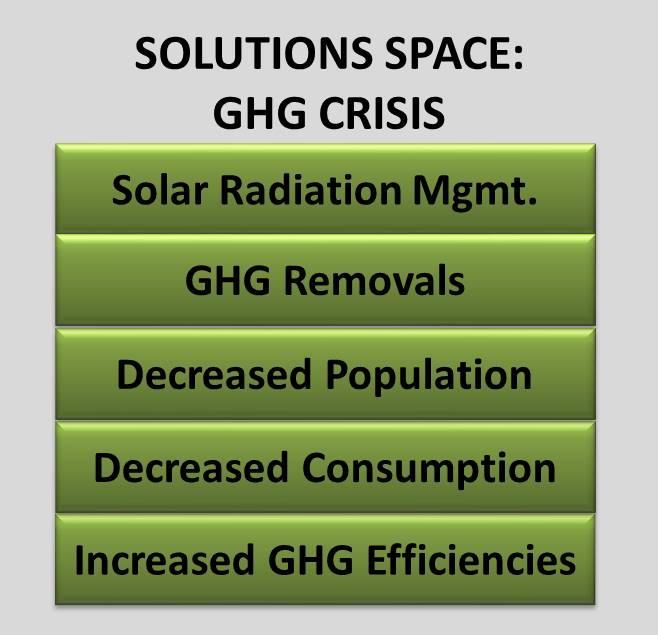 This solutions space is complete in that it covers all the available options.  That is, any measure that might help our species overcome the GHG crisis will be included in one of these five categories.  As indicated above, the analytical significance of the space is that it identifies the solution categories that must be thoroughly examined in order to formulate a valid crisis response.  Thus, for example, any response that omits a rigorous analysis of solar radiation management (SRM) or decreased consumption is incomplete and thus invalid.

Because the IPCC provides global leadership on the GHG crisis, its approach to potential solutions provides global guidance.  It is therefore shocking to discover that the organization does no solutions analysis whatsoever.  The IPCC carefully analyzes problems, vulnerabilities, and impacts, but it fails to pay similar attention to solutions.  It too has jumped on the efficiency bandwagon.  Such a narrow, unsystematic approach may seem implausible for this esteemed body, so let me provide some evidence to support my claim.

My first point is that the IPCC has largely abandoned the solutions component of its original mandate.  When the organization was created in 1988, the World Meteorological Organization (WMO) charged it with two discrete tasks: assessing the scientific information relating to climate change and, “… formulating realistic response strategies“.  If you go to the IPCC website today you’ll find that its mandate is described as, "... regular scientific assessments on climate change, its implications and potential future risks, as well as to put forward adaptation and mitigation options."  (Or similar - the formulation changes slightly over time.)

This shift is important because “realistic response strategies” can be reasonably interpreted as referring to the entire solutions space, whereas “mitigation” is explicitly restricted to GHG sources and sinks – that is, GHG efficiencies and removals.  The IPCC has therefore eliminated three of the five solution categories: SRM, decreased population, and decreased consumption.  No explanation has been offered, and to my knowledge neither the WMO nor any other interested party has expressed concern or lodged a protest.

Further evidence for the IPCC’s refusal to thoroughly examine solutions is its treatment of the Arctic catastrophe.  The most extensive discussion of this topic in the latest Assessment Report (AR5) is chapter 28 of this report on regional impacts.  Although much is ignored here (methane hydrates go unmentioned!), topics such as the melting permafrost, shrinking sea ice, and the harms to various species are covered.

In the Mitigation report, however, this critical topic is completely ignored.  I don’t mean that the discussion is deficient … it’s not there at all.  I found this so incredible that I did a word count on “Arctic” in the five AR5 reports to confirm my impressions and gain some insight.  Here are the results:

The reports are of different lengths, so the graph depicts the frequency of the word “Arctic” per 100 pages.  On this basis, the numbers for the first four reports are 51 (Synthesis), 73 (Physical Basis), 39 (Impacts A), and 82 (Impacts B) – an average of 65.  This indicates that the Arctic problem and its impacts receive solid treatments in both the technical and summary documents.  By sharp contrast, the number for the Mitigation report is three.  Specifically, “Arctic” occurs 39 times in 1,450 pages.  Thirty of these are in the chapters’ reference sections rather than the text, leaving only nine scattered occurrences within the report itself.

Think about this for a minute.  The Arctic likely hit a tipping point in 2005 when melting summer ice exposed enormous quantities of methane hydrates to the sun’s heat.  Nine years later a massive report on climate change solutions is released by the world’s most authoritative climate organization, and it fails to even broach the issue.  Given the existential implications of the Arctic meltdown, this is solutions denial in its most egregious and perilous form.

Thus far I have identified two reasons for the social invisibility of solutions denial: the absence of a relevant analytical tool and the IPCC’s narrow solutions approach.  A third reason, which could be the most significant of all, is that the concerned have been preoccupied with the battle against problem denial.  The diagram below will be used to examine this near-obsession from several angles. 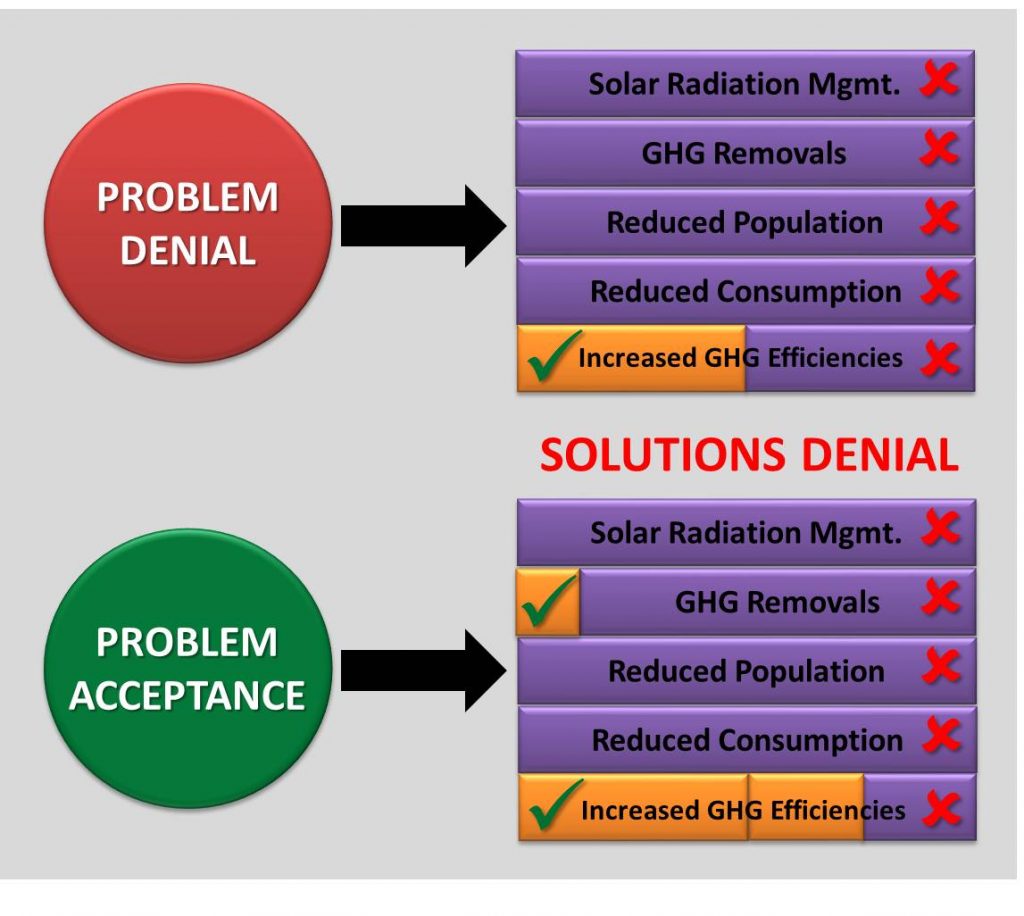 At left are the two basic positions with respect to the GHG problem: denial and acceptance.  At right are the corresponding versions of solutions denial.  As can be seen, the problem deniers dismiss all solution categories except profitable increases in GHG efficiencies (gold color).  Those who accept the problem are somewhat less restrictive in that they push for some unprofitable efficiencies and have adopted an extremely modest plan for GHG removals.

The key point is that the solutions spaces are virtually identical, with most possibilities being rejected in both cases.  The minor differences that do exist are likely to be environmentally inconsequential.  This means that the choice between problem denial and problem acceptance is largely meaningless.  What matters to the environment is the solution measures we implement, not the attitudes we express towards the problem.

This in turn implies that the fight against problem denial, while necessary to keep the issue alive, is otherwise irrelevant.  Even if every “climate denier” were to admit their error and switch sides tomorrow, humankind’s response to the GHG crisis would still be frighteningly inadequate. The struggle against these fanatics is therefore a red herring.  It looks impressive, but it won’t make a noticeable difference to our ecological future.

Another important point is that solutions denial is damaging only in relation to those who accept the problem.  The problem deniers have no interest in solutions, so their solutions denial is immaterial.  Those who accept the problem do want solutions, so their solutions denial prevents these from being considered.  This is the reason for my intense focus on the IPCC: it serves to neutralize the environmentally concerned, who are only people who will potentially act.  At this late stage there is no question that, unless this group is quickly activated, the biosphere will be consigned to the dustbin of planetary history.

A similar neutralization applies to the scientists whose research underpins the IPCC’s reports. Thousands of experts are laboriously extracting ice cores, analyzing lake sediments, and enhancing computer models, but to what effect? The results of all this work are fed into the IPCC hopper and then ground into efficiency platitudes. Without a comprehensive solutions analysis it doesn’t matter what the scientists achieve because everything will be reduced to the few pallid measures that the organization has chosen to embrace. I find this vast nullification of educated minds and painstaking efforts to be one of the most lamentable aspects of the solutions-denial debacle. 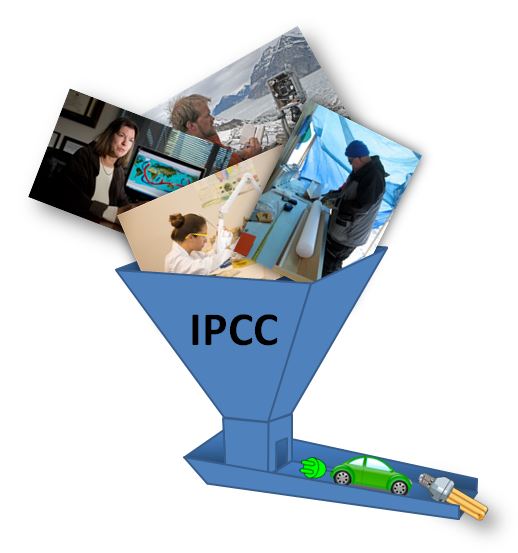 To summarize, the true environmental danger for humankind and nature lies not with the problem deniers, but with the IPCC-led solutions deniers.  Peter Sinclair concludes one of his videos by saying that the rapid rise in global temperature is, “… a warning for what may yet happen if human beings fail to wake up in time from climate denial disinformation.”  Such an awakening, however, would merely present our species with a tightly restricted range of solution options that cannot conceivably reverse this deadly upsurge.

The critical requirement today is to extend this range to include ALL solution possibilities: solar radiation management, GHG removals, decreased consumption and population, and increased efficiencies.  To win our last-ditch battle against ecological catastrophe we will need every weapon at our disposal.  This inclusive approach is widely avoided because it directly confronts the mainstream’s heedless economic expansion.  There is thus one further requirement for a sustainable future: courage.