Actor William Shatner, who played Captain Kirk on Star Trek,  briefly visited space in the fall of 2021.  He had accepted an invitation from Amazon's Jeff Bezos in order to experience the "majesty", " wonder", and " harmony of the universe".  What he actually experienced was radically different, and provides valuable insights about humankind's place in the cosmos.

In his book, Boldly Go: Reflections on a Life of Awe and Wonder, Shatner eloquently describes what happened.  He first looked back at the Earth and was struck by the atmosphere's thinness and fragility.  He then turned towards space and, against all his expectations, was horrified by what he saw.  After expressing amazement at the interconnection of all life on Earth, he writes: 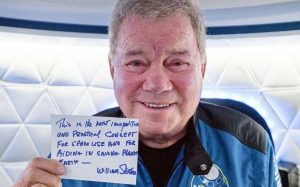 "That beauty, that magnificence of the evolutionary process, struck me so hard in that moment because when I looked in the opposite direction, into space, there was no mystery, no majestic awe to behold… all I saw was death.

"I saw a cold, dark, black emptiness. It was unlike any blackness you can see or feel on Earth. It was deep, enveloping, all-encompassing. I turned back toward the light of home. I could see the curvature of Earth, the beige of the desert, the white of the clouds and the blue of the sky. It was life. Nurturing, sustaining life. Mother Earth. Gaia. And I was leaving her. Everything I had thought was wrong.

"Everything I had expected to see was wrong. Every lyric Rob and Dan and I had prewritten for my new song was wrong.

"I had thought that going into space would be the ultimate catharsis of that connection I had been looking for between all living things—that being up there would be the next beautiful step to understanding the harmony of the universe.  In the film Contact, when Jodie Foster’s character goes to space and looks out into the heavens, she lets out an astonished whisper, “They should’ve sent a poet.”  I had a different experience, because I discovered that the beauty isn’t out there, it’s down here, with all of us. Leaving that behind made my connection to our tiny planet even more profound.  …

"The contrast between the vicious coldness of space and the warm nurturing of Earth below filled me with overwhelming sadness. Every day, we are confronted with the knowledge of further destruction of Earth at our hands: the extinction of animal species, of flora and fauna…things that took five billion years to evolve, and suddenly we will never see them again because of the interference of mankind. It filled me with dread. My trip to space was supposed to be a celebration; instead, it felt like a funeral."  (Boldly Go, pp. 89-90; italics in original.)

Shatner notes that many astronauts, including Yuri Gagarin and Sally Ride, have had a similar experience.  However, I have never seen it expressed so clearly and passionately.  Shatner's account allows us to vicariously share his unanticipated shock, allowing us to imagine what he saw and felt, and to draw some conclusions.  These are mine: