Image by Iván Tamás from Pixabay

In my last post I addressed the key facts about geoengineering.  Here I examine the arguments for and against this contentious approach.  Because emission reductions are often cited as the alternative to geoengineering, I begin by explaining their respective impacts on the environment.  For simplicity, I consider only the global warming effects of excess greenhouse gases (GHGs).  Ocean acidification is therefore ignored.  See the diagram below. 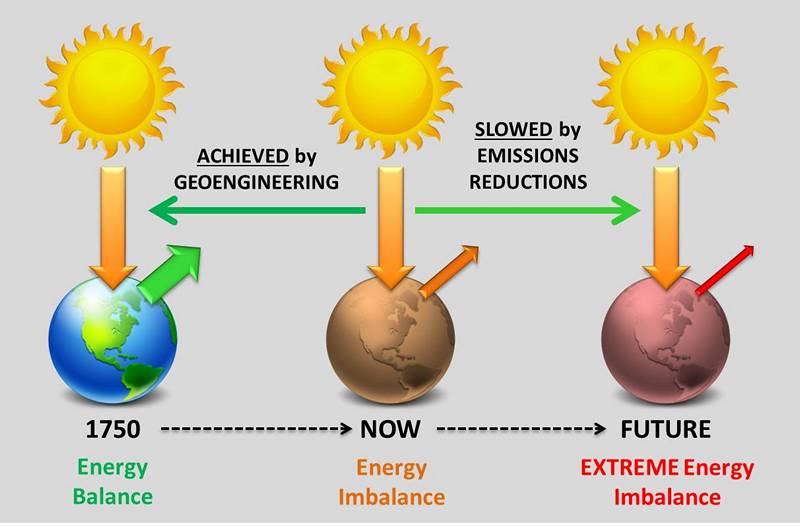 Here we see the growing imbalance between the sun’s incoming energy and the Earth’s outgoing energy.  This imbalance is responsible for global warming.  If it continues to grow it will soon reach calamitous levels, resulting in runaway warming and a severely degraded biosphere.

To intuitively grasp the different effects of geoengineering and emission reductions, picture yourself on our dangerously unbalanced planet at the center of the diagram.  You are moving steadily to the right and thus into extreme peril.  What you want to do is first slow, then stop, and finally reverse this movement.  How can these steps be accomplished?

To state the obvious, emission reductions reduce the rate of GHG emissions.  Using the blankets analogy from my post on the emissions fallacy, this means that, compared to business-as-usual, thinner blankets are annually being thrown over the atmosphere.  Thinner blankets won’t solve Earth’s energy imbalance problem, but they will slow the rate at which the problem is growing.  Emissions reductions are thus effective in slowing your movement to the right.  Now, what can geoengineering do for you?

Geoengineering has two results: it increases the Earth’s outgoing energy by removing GHGs from the atmosphere, and it decreases the incoming energy by reflecting the sun’s radiation.  It thus acts to restore the Earth’s energy balance – that is, to move you to the left in the diagram.  However, you are currently moving to the right.  This means that geoengineering initially opposes this movement: it acts in concert with emission reductions  to slow your rightward drift towards catastrophe.

This brings me to the fundamental and unassailable argument in favor of geoengineering: it is humankind’s ONLY means for restoring a safe energy balance.  Emission reductions can assist in this restoration, but it cannot achieve it, and there are no other options waiting in the wings.  Although geoengineering can cause environmental damage, this cannot conceivably exceed the ecological destruction resulting from the rapidly mounting energy imbalance.  Thus, even if geoengineering is seen as an evil, it is clearly the lesser of the two evils we face.

Let me now address the main arguments being used against geoengineering.

1. Emissions reductions are the real solution.

This is false. As noted above, emission reductions cannot reverse the Earth’s energy imbalance, and thus cannot solve global warming. The claim is also disingenuous. As explained in my post on mainstream emission reductions, emissions are affected by three factors: population, consumption, and efficiencies. In mainstream reductions the first two are ignored. The approach thus relies entirely on higher efficiencies, which cannot achieve the drastic emission cuts that are now required.

The term “moral hazard” comes from economics, where it denotes the lack of incentive to guard against a risk. In the present context it refers to the lack of corporate or personal incentive to reduce emissions because geoengineering is addressing the global warming problem.

This argument receives far more credence than it deserves. First, the disincentive applies to mainstream emission reductions, which as stated is not a serious attempt to reduce emissions. Attention is therefore being shifted away from a largely ineffective approach. Second, many people will have precisely the opposite reaction. Once they learn about the difficulties, costs, and risks associated with geoengineering, they will see emission reductions as extremely valuable: every avoided emission is one that does not have to be laboriously extracted from the air or negated by blocking the sun. Third, the corporate embrace of geoengineering might well be positive for the environment. The geoengineering taboo would finally dissolve, leading to significant improvements in its methods and a strong impetus for their implementation.

3. Geoengineering will hurt the poor.

This is certainly possible, especially with solar radiation management (SRM), and must be carefully minimized. However, the judicious implementation of geoengineering will also help the poor – immensely. They rely on local agriculture and thus the climate for their day-to-day survival, and only geoengineering can prevent its further degradation. As well, the aggressive implementation of greenhouse gas removal (GGR) will permit the poor to continue using fossil fuels for their basic needs until clean energy becomes readily available to them. Curiously, those who make this argument always cite the potential dangers of geoengineering to the poor, but rarely mention its potential benefits.

This is true, but the reason is that geoengineering has for decades been under a cloud of suspicion that has made research on these methods a virtual taboo.  Now that we need them to reverse global warming, they are woefully underdeveloped.  This neglect could turn out to be the most grievous error in the history of our species.

5. We're messing with a system we don't fully understand.

This is true as well, but we know far more than at any time in the past 250 years, when we were also messing with a system we didn’t fully understand. It must also be asked why a complete understanding is demanded in this particular area. Many drugs, for example, are prescribed simply because they work, not because anyone understands their detailed effects on the human body. The real question is this: do we understand the Earth system sufficiently to take prudent and decisive action? I believe the answer here is yes.

This is false.  First, many geoengineering methods relate to agricultural methods, forest management, and low-tech initiatives such as painting roofs and sprinkling nutrients on the ocean.  These hardly constitute the kind of industrial thinking that caused the problem.  Second, the issue is not industry or technology per se, but rather the purposes for which these are employed.  Cambridge physicist Peter Wadhams makes this point in his eye-opening book, A Farewell to Ice: “We have destroyed our planet’s life support system by mindless development and misuse of technology.  A mindful development of technology … is now necessary to save us. It is the most serious and important activity in which the human race can now be involved, and it must begin immediately.”  (p. 193, emphasis added)

7. The problem is not technical, it's social.

This argument is sometimes stated in an alternative form: we don’t have to fix nature, we have to fix ourselves.  I confess that I held this view for many years, so I understand its powerful appeal.  It is nevertheless an error.  Both the IPCC and the National Academy of Sciences have pointed out that reducing GHG emissions to zero would still leave humankind with decades or centuries of warming and sea-level rise.  Even the most radical economic restructuring and changes in personal behavior would not prevent these disasters.  The problem is in fact both technical and social: technical measures are required to repair the damage we’ve already done to nature, and social measures are required to minimize our future damage.

8. There is no international governance.

This is true, but no real effort has been made to put such governance in place. Geoengineering was first proposed in a report to US president Lyndon Johnson in 1965, so the international community has had over half a century to create suitable governance structures. In that time global cooperation has been achieved in emission reductions (Kyoto, Paris), nuclear research (CERN), space research (ISS), and trade (GATT, NAFTA) – but not geoengineering. Now it’s probably too late. The best that can be hoped for at this point is an agreement by a few major countries on the terms of a rapid geoengineering rollout. Insisting on anything more is just another way of evading the geoengineering imperative.

To summarize, geoengineering is the only means available to humankind for restoring the Earth’s energy balance and thus averting a global warming catastrophe.  Emission reductions can provide valuable support, but basic scientific logic tells us that by itself it cannot accomplish this task.  This implies that there is no valid argument against geoengineering in principle.  If we want to survive, it must be done, and done quickly.  The role of the valid counter-arguments is to set the conditions for geoengineering: massively increase research, obtain some international agreement if possible, implement cautiously, watch for unintended consequences, protect the poor, and finally get serious about emission reductions.  This combination – aggressive emission reductions and rapid geoengineering under appropriate conditions – is our only salvation.  And as Ronald Wright pointedly stated in his conclusion to A Short History of Progress, “Now is our last chance to get the future right.”