In this post I outline the key facts about geoengineering.  The arguments for and against this approach to the environmental emergencies are discussed here.

My primary sources of information were the Royal Society’s Geoengineering the Climate (UK, 2009) and two reports by the National Academy of Sciences – Climate Intervention: Reflecting Sunlight to Cool the Earth and Climate Intervention: Carbon Dioxide Removal and Reliable Sequestration (both US, 2015).  Also useful were Jeff Goodell’s introductory How to Cool the Planet (2010) and David Keith’s perceptive book, A Case for Climate Engineering (2013).

“Geoengineering” is defined by the Royal Society as, “… the deliberate large-scale intervention in the Earth’s climate system in order to moderate global warming.” (p. xi)  The term is somewhat unfortunate, for three reasons.  First, geoengineering is not engineering in the conventional sense because large-scale environmental manipulation is far less precise than building a machine or a bridge.  Second, geoengineering methods such as land and forest management are not generally seen as engineering tasks.  And third, the word itself has become tainted after being persistently associated with irrational, mad-scientist schemes.  It is nevertheless the generally accepted term and I will use it in my posts.

Even if geoengineering is perceived without bias, it often means little more to people than some desperate measures to counteract global warming.  To fully understand this approach it is necessary to grasp its essential nature: what are these methods really intended to accomplish?  The diagram below will help me explain this. 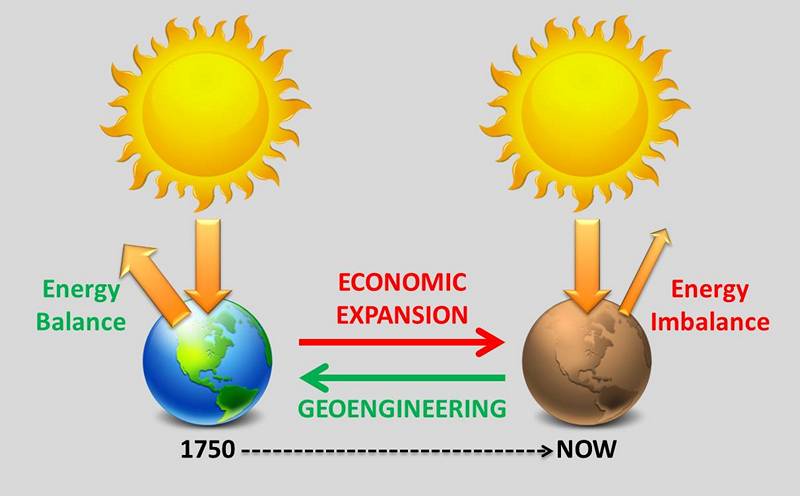 At left are the sun and Earth in 1750, prior to the Industrial Revolution.  At this time the Earth had changed little from the warm and stable climate that spawned human civilization ten thousand years earlier.  The diagram therefore shows that the radiation flowing from the sun to the Earth is equal to the radiation flowing from the Earth into space.  This creates an energy balance, which means there is no net heating of the planet and thus no global warming.

Over the next 250 years this longstanding equilibrium was significantly disturbed.  The global economy voraciously consumed fossil fuels during its rapid expansion, causing a sharp rise in the atmospheric concentrations of greenhouse gases (GHGs).  As a result, some of the radiation flowing from the Earth was prevented from escaping into space.

As can be seen on the right side of the diagram, this has resulted in an energy imbalance, with less radiation flowing out than in.  The effect of this imbalance is global warming.  Geoengineering, in essence, is humankind’s attempt to reverse this historical process. The term thus refers to the methods used to restore the Earth-sun energy balance in order to escape a global warming catastrophe.

As can be seen by looking at the “imbalance” arrows, there are two distinct ways to achieve this end: increase the energy flowing out from the Earth and decrease the energy flowing in from the sun.  This division is the basis for the two sets of methods that constitute geoengineering.  The first, Carbon Dioxide Removal (CDR), is intended to reduce the excessive CO2 concentration that is impeding the Earth’s outgoing radiation.  The second, Solar Radiation Management (SRM), is intended to block the sun’s incoming radiation or to minimize its absorption by the Earth.  Let me briefly describe the various techniques that have been developed in each category.

I begin with CDR because this addresses the core reason for global warming: the increases in GHG concentrations since 1750.  Unfortunately, CO2 is the only GHG that has been targeted for removal from the atmosphere.  Although methane is a major short-term contributor to global warming, no techniques have been developed – or appear to be contemplated – for reducing the concentration of this gas.

The main CDR methods are depicted in the diagram below:

The main methods for CO2 absorption by the land are shown at left in the diagram and briefly explained in the table below.

The last category, which transfers CO2 from the atmosphere into the ocean, are shown on the right in the diagram and briefly explained in the following table.

The Royal Society report provides details on each of the above methods and evaluates them based on their effectiveness, affordability, timeliness, and safety.  Its overall assessment is this:

“All of the CDR methods have the dual beneﬁt that they address the direct cause of climate change and also reduce … ocean acidiﬁcation. … However, they have a slow effect on the climate system … and so do not present an option for rapid reduction of global temperatures.” (p. 21)

The Society also concludes that, with the exception of ocean fertilization, all CDR methods pose low to medium environmental risks.

The second set of methods for restoring the energy balance is SRM.  These techniques increase the Earth’s albedo, or reflectivity, so that less solar radiation is available to warm the planet.  Scientists have calculated that a 1.8% reduction in solar radiation will counteract the warming that would result from a doubling of the pre-industrial CO2 concentration (280 ppm to 560 ppm).  The main albedo-enhancing methods that have been developed or proposed are depicted in the diagram below and explained in the accompanying table: 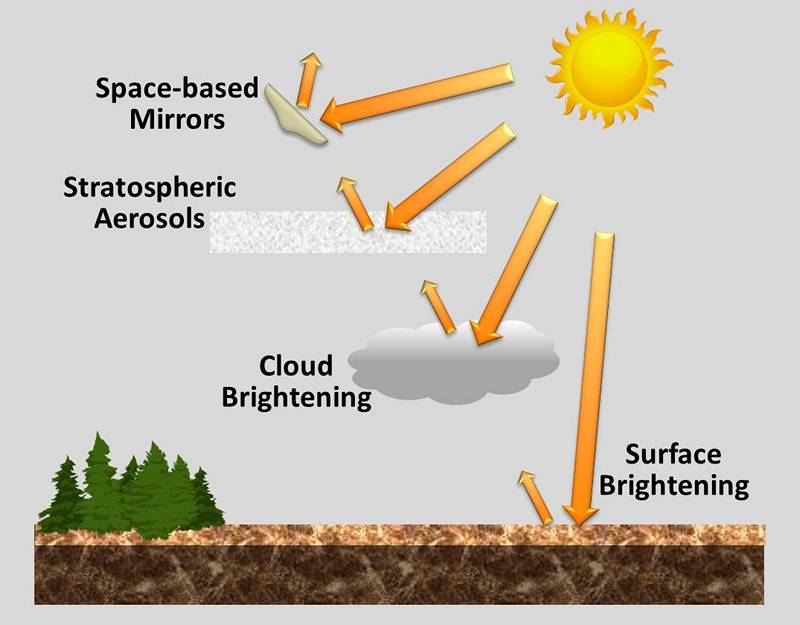 The Royal Society report summarizes these methods as follows: “SRM methods do nothing to reduce concentrations of CO2 but have the advantage over CDR methods that they reduce mean global temperatures rapidly after deployment. … Deployment could therefore be delayed until the need for emergency climate intervention became apparent.”  The Society also notes that SRM in general poses higher environmental risks than CDR.

To recap geoengineering as a whole: This is a collection of methods for restoring the energy balance between the Earth and the sun.  CDR methods extract CO2 from the atmosphere and thus increase the energy flowing out from the Earth.  These are fairly safe, but they are slow to moderate global warming, and the sequestration of massive quantities of CO2 poses considerable challenges.  SRM methods reflect sunlight and thus decrease the energy flowing in from the sun.  These can be risky, but they act rapidly and can thus be employed to avert the points of no return that imperil our future.

Geoengineering has long been a taboo subject, so research in this area has lagged far behind the research devoted to emission reductions.  However, recent Arctic events strongly indicate that climate tipping points have been reached, and this reluctance is rapidly eroding.  I therefore anticipate considerable progress on geoengineering methods in the years to come.

The following articles provide useful information to augment this post:

In my next post I will evaluate the arguments that have dominated the geoengineering debate.  I will show that, while some arguments against this approach are valid, others are based on bad science and faulty logic.