When a team is behind in a basketball game, time becomes a serious factor several minutes before the final buzzer. What typically happens is that the team’s normal style of play gives way to an accelerated pace and intense pressure to regain the ball and score points. The ecological crisis is roughly analogous. We’re losing a game called “human survival,” and time is now a critical factor. Any strategy for resolving the crisis must therefore incorporate a sense of extreme urgency and a fixed deadline for decisive action. I use the “point of no return” concept to address these imperatives.

The phrase “point of no return” (PONR) originated as a technical term in aviation. There it means the point in a flight where an aircraft lacks sufficient fuel to return to its starting airport. This piquant image became a metaphor for the irrevocable commitment to a course of action. In the environmental arena PONR refers to a degree of ecosystem degradation where environmental repair has become futile and collapse is inevitable. If the health of this ecosystem is central to human survival, then reaching its PONR implies an unavoidable human die-off and possibly our extinction. The following diagram is intended to clarify this concept and to distinguish it from a tipping point. 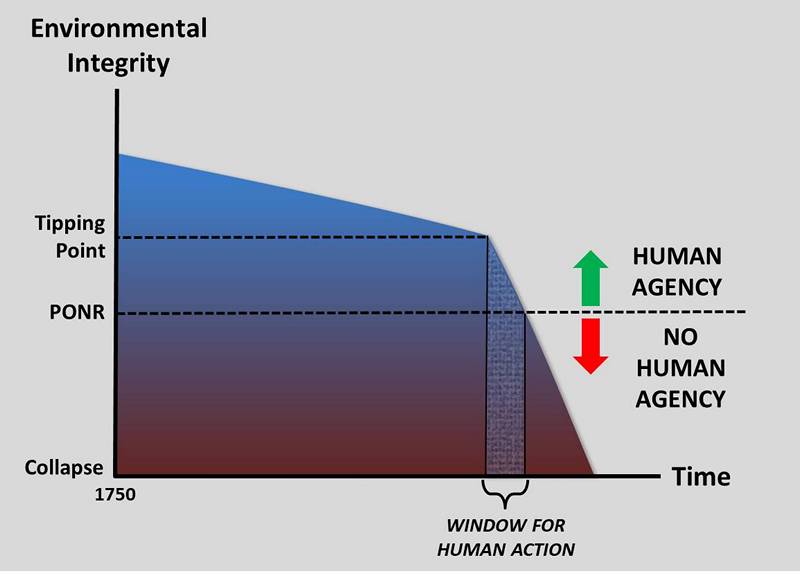 The graph traces the environmental integrity of an ecosystem from the pre-industrial period into the future. This integrity gradually declines due to the rapid expansion of humankind’s economic activities. At a certain point, positive feedbacks are activated and the ecosystem’s internal dynamics strongly accentuate the human influence. This is a tipping point. Although such an event is dangerous, it does not necessarily imply collapse. If humankind acts quickly and effectively, it may be possible to reverse the damage and return to prior conditions.

In many cases, however, there is only a limited time window for human action once a tipping point has been reached. This is shown in the graph above. If this window is missed, positive feedbacks will overwhelm even our best remedial efforts and collapse will ensue. This is the point of no return, or PONR.

To envisage this critical event, imagine a boulder that has started to roll down a hill. If sufficient effort is mustered to stop the boulder before it has gained much momentum, it can be halted and rolled back up. If this effort is postponed even briefly, the boulder will be unstoppable: all we can do is stand back and watch it thunder to the bottom.

The significance of a PONR is that it marks the division between the presence and absence of human agency – that is, our capacity to effectively intervene. If an ecosystem is to be saved, solutions must be implemented before its PONR is encountered. For example, it is pointless to refreeze the Arctic after the permafrost has melted and a methane burst has triggered runaway global warming. Similarly, it is futile to remove CO2 from the atmosphere after its concentration has initiated unsurvivable events. A PONR thus specifies the time window for valid or workable solutions to ecosystem damage. See the diagram below.

Two PONRs are shown on the timeline because multiple ecosystems are currently under threat. As indicated, the valid solutions for each ecosystem are those that can be effectively implemented before their respective PONRs are reached. Any strategy that plans to implement the solution at a later time is irrational and must be rejected as unworkable.

To make this more concrete, let me elaborate on my previous examples, with Arctic permafrost being ecosystem #1. As described here, an international team led by Oxford geoscientist Anton Vaks has found that, about 400,000 years ago, Siberian permafrost began to melt when the global temperature was 1.5 ºC above the pre-industrial level. As noted here, this level has almost been reached. We can grimly assume that the globe will shoot past this mark in the next decade, and that the resulting methane releases will produce runaway warming. Thus, humankind could well be facing an initial, existential PONR that is only ten years away. To avoid a die-off or worse, we must substantially cool the Arctic within this highly constrained timeframe.

The example for PONR #2 is the atmosphere’s CO2 concentration, which is currently at about 402 ppm. Assume that climate scientists agree that 430 ppm would trigger irreversible climate and ocean disasters. At an average increase of 2 ppm per year, this means that PONR #2 will be reached in about 14 years. Given that emissions are likely to remain high, humankind will have to find and implement methods for removing immense quantities CO2 from the atmosphere within a decade and a half.

The concept of a PONR is straightforward and indispensable, and should logically dominate environmental thinking at this late date. Tragically it does not. Most mainstream sources still talk blithely about measures that will take effect in several or many decades, without even a hint that multiple PONRs are now imminent. This is yet another environmental deception to add to the emissions fallacy and mainstream emissions reductions.

The avoidance of the PONR concept is greatly facilitated by the pervasive suppression of urgency. This refers to the public pretense that the ecological crisis isn’t really that bad, and that we therefore have plenty of time to respond. For example, physicist David Keith repeatedly pooh-poohs the idea that climate change is a major threat in his otherwise useful book, A Case for Climate Engineering (2013). Similarly, political scientist David Victor tells us in Global Warming Gridlock (2011) that there is only a small chance that global warming will cause catastrophic effects. The reports of the IPCC, the National Academy of Sciences, and other respected bodies are riddled with similar expressions of skepticism about the gravity of our situation and the urgency of our response. Such statements are clearly ludicrous in the face of recent Arctic events, but they continue to dominate mainstream discourse.