NEXT Climate Science Post:  Mainstream Emissions Reductions, or How to do NOTHING

I recently said that mainstream sources such as the IPCC implicitly use a falsified model of GHG effects when offering policy prescriptions and making public statements. The central feature of this falsification is the emissions fallacy. This is the idea that the climate and ocean emergencies should be addressed exclusively through emissions reductions, thereby ignoring reductions in existing GHG concentrations.

In this post I address the fallacy in more detail. I confine myself to its scientific aspects, leaving the political aspects – why it dominates current thinking – for a later post. To simplify the discussion I use CO2 as the representative GHG and focus on its warming impacts.

The emissions fallacy is not subtle and is easily refuted through a simple argument: The current CO2 concentration is dangerously high and must be drastically reduced.  Reduced emissions can slow the concentration increase, but cannot achieve its reduction.  Therefore, the strategy’s logic is fallacious.  Despite this ready dismissal, the fallacy is deeply entrenched and requires a more detailed examination.  See the graph below. 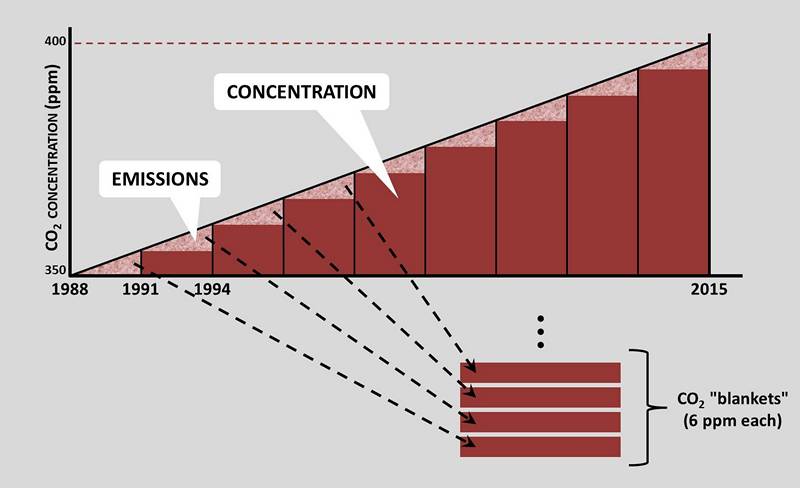 The graph depicts the atmosphere’s rising CO2 concentration from 1988, when it reached 350 ppm, to 2015, when it was on the verge of reaching 400 ppm. I assume that 350 ppm is the safe limit, although many climate scientists say this is too high. I have divided the 27-year period into nine 3-year segments to facilitate the analysis. Now let’s replay history and see how humankind should rationally respond as the concentration rises from 1988 by the average of 2 ppm per year.

At the start of this period the CO2 concentration level is deemed to be safe, so there is no point in lowering it. All our efforts should therefore go towards preventing emissions from driving this level into unsafe territory. In other words, an emissions-only strategy is the correct approach at this early stage.

Unfortunately we fail to reduce emissions adequately, so the CO2 concentration rises to 356 ppm over the first three years. This means that a metaphorical GHG blanket, 6 ppm thick, has been placed over the atmosphere. This blanket, like those to follow, will warm the Earth’s surface for as long as it remains in place.

We’re now in 1991, and facing a different situation from three years earlier. The CO2 concentration is now unsafe, and more of this pollutant is being pumped into the atmosphere every day. We should therefore switch immediately to a dual strategy: remove the excess CO2 from the atmosphere and increase our efforts to reduce CO2 emissions.

By 1994, after another three years of inadequate emissions reductions, the CO2 concentration has risen to 362 ppm and another blanket has been thrown over the atmosphere. Note also the quantitative realities: emissions over this period now account for one-third of excess CO2, whereas the existing concentration accounts for two-thirds. Already the concentration causes twice the damage and offers twice the scope for returning to the safe level.

This process continues, with the environmental significance of the concentration rising rapidly and that of emissions dropping steadily. By the time we reach 2015 it is visually obvious that the concentration far outweighs emissions, and that virtually all our resources should be allocated to CO2 removals.

Contrast the preceding with the IPCC’s assertions that, “Limiting climate change would require substantial and sustained reductions in greenhouse gas emissions …”, and that the severity of climate change by the middle of this century is, “… substantially affected by the choice of emissions scenario.” (Synthesis Report, pp. 8 and 10) Such statements appear repeatedly, and they consistently omit the possibility of concentrations reductions. 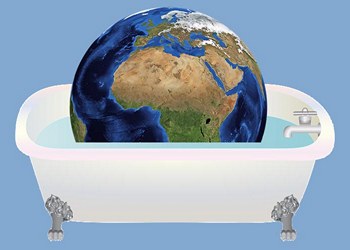 What the organization is implicitly saying is this: if GHG concentrations are ignored, their eventual levels will be determined by the pattern of future emissions. This is of course true, but the fact that concentrations are being sidelined is carefully concealed. To switch metaphors, the IPCC is telling us that, if no-one pulls the plug on a half-filled bathtub, the eventual level will depend entirely on the water flowing from the tap. That’s indisputable, but it’s also obvious that the plug can be pulled to reduce the water level just as the tap can be closed to reduce the water flow.

It appears to me that the underlying intent of this deception is to deny human agency – our capacity to act – with respect to existing GHG concentrations. If this sounds far-fetched, consider the following. When oil is in its natural state, humankind can respond: “Leave it in the ground!” When oil has been extracted and is sitting in a tank, humankind can again do something: “Increase efficiencies!” But once oil has been burned and its emissions are in the atmosphere, we’re suddenly powerless: there is no rallying cry to “Remove!” or “Draw Down!” We are therefore being told that human beings have agency when oil is relatively harmless, but not when it threatens life on Earth. You might agree with me that something very strange is going on here.

The truth is that reducing emissions and lowering concentrations have equivalent environmental effects. Reducing a unit of CO2 emissions is the same as not doing so but then removing it. To illustrate, recall that CO2 emissions have been increasing by 2 ppm per year. Assume again that the current concentration is 400 ppm. If emissions are reduced by 1 ppm, we will end up with 401 ppm of CO2 (400 + 1). If emissions are not reduced but 1 ppm is removed, we will again end up with 401 ppm of CO2 (400 + 2 – 1).

There are two important distinctions between the two approaches.  The first, as noted above, is that the scope for GHG removals far exceeds that of emissions reductions.  The second relates to the kinds of solutions they imply. Reducing emissions requires solutions in the social world because it entails changes in economic activities and thus ongoing human behavior. Reducing concentrations requires solutions in the natural world because it entails the reversal of environmental damage that was caused by past human behavior. A sound GHG strategy must include both types of measures, at least until the possibilities for emissions reductions have been effectively exhausted.

To summarize, the GHG-based emergencies have been widely portrayed as flow problems: emissions only. This is categorically false. They are instead stock and flow problems: both concentrations and emissions are relevant. To use the blanket analogy, it is the accumulation of blankets that could suffocate us, not just the last one added.

NEXT Climate Science Post:  Mainstream Emissions Reductions, or How to do NOTHING