In my previous post I said that the emissions fallacy – the fixation on greenhouse gas (GHG) emissions rather than their concentrations – has been used to marginalize geoengineering. In this post I clarify the effects of these gases on the environment. This will allow me to address the fallacy in more depth in my next post.

The significance of GHGs lies in the fact that they underpin each of the environmental emergencies that have been spawned by the ecological crisis. Excess GHG concentrations are responsible not only for the atmospheric warming that results in climate change, but also for the ravages of ocean warming, acidification, and deoxygenation.  Although the crisis itself extends to problems such as pollution, toxification, and habitat destruction, these emergencies pose the most immediate threats to life on earth. They must therefore be tackled with the greatest urgency.

What is needed for non-scientists to properly understand GHGs is a simple physical model that provides a clear picture of their main effects. I have not found this in any of the mainstream publications I have consulted. For example, the IPCC’s latest assessment report contains over 5,000 pages, but not a single one depicts the required model. This void leaves the reader without a conceptual framework for interpreting the mountains of data collected by IPCC scientists, largely nullifying their research for policy and strategic purposes. The following is my proposed model, which I believe reflects current scientific understanding: 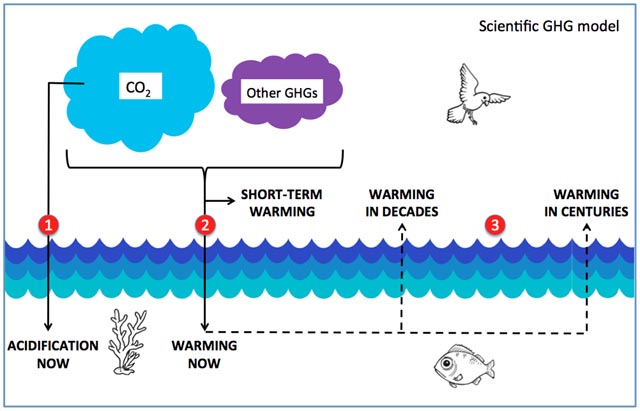 At the top of the diagram are the atmospheric GHGs, split into CO2 and other GHGs because of their discrete effects. The “other GHGs” cloud is smaller to indicate that methane, nitrous oxide, etc. cumulatively add about 45% to the warming caused by CO2. At the bottom of the diagram is the global ocean.

The first effect is ocean acidification, which is caused by the excess CO2 concentration alone. This occurs in the short term – that is, immediately or within a few years. According to most sources, 25% of excess CO2 is absorbed by the oceans, which has caused the ocean’s acidity to rise by about 30% since the pre-industrial period. An important but frequently overlooked fact is that a sharp reduction in the atmospheric CO2 concentration will cause CO2 to outgas from the ocean. Although this makes it more difficult to reduce warming, it allows at least some human control over the acidification problem.

The second effect is ocean warming and the resultant deoxygenation, which are caused by excess GHG concentrations as a whole. These also occur in the short term because 95% of the warming attributed to GHGs is quickly absorbed by the ocean. The remaining 5% is absorbed by the land, ice, and atmosphere. Because of the ocean’s massive bulk, its surface has warmed by less than one degree Celsius, and its depths even less. However, the total quantity of this added heat is enormous: if it had gone into the atmosphere instead, the latter would have warmed by an astonishing 36º C.

The last effect is atmospheric warming. This is also caused by GHG concentrations as a whole, but unlike the other two effects the bulk of this effect is delayed. The reason was indicated above: almost all the GHG-based warming enters the ocean, which responds slowly and releases its heat gradually. This phenomenon is called thermal inertia. According to one reliable source, 1/3 of atmospheric warming occurs in the short term, 1/2 within 25 years, and 3/4 within 250 years. Other sources provide slightly different figures, but all agree that much of the atmosphere’s warming is delayed by decades and centuries.

In contrast to this two-pronged GHG approach, mainstream sources promote emissions reductions almost exclusively.  This difference may seem strange because all my information was derived from the mainstream: the IPCC, NASA, NOAA, the EPA, the US military, the National Academy of Sciences, etc.

The explanation for this disparity is that these sources use two distinct GHG models. When presenting detailed scientific information they implicitly use the above model and largely stick to the facts. However, when offering policy prescriptions and making public statements they implicitly use a falsified model and blatantly distort the facts. This is their falsified version: 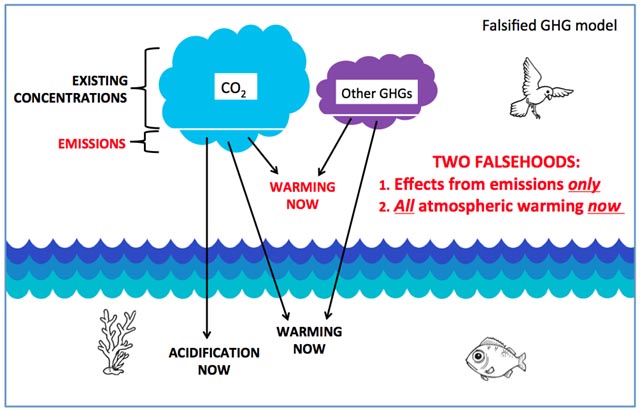 It is only when these two falsehoods are embraced that the emissions-only approach makes any sense. In this distorted version of reality, cutting our GHG emissions will be sufficient to control ocean degradation, and it will be effective in slowing climate change. As well, the geoengineering method of GHG removals becomes superfluous. Without concentrations to decrease, there is no need to remove GHGs from the atmosphere. Commentators are thus free to ridicule this method as a menacing techno-fix proposed by mad scientists and unhinged analysts.

One last point: the unacknowledged existence of two distinct GHG models explains why such a model rarely sees the light of day. If the scientific model were shown, it would reveal that the emissions-only response is futile. If the falsified model were shown instead, the mainstream’s pretense of scientific integrity would be shattered. This is a classic bind, with avoidance as the only escape.