NEXT Climate Science Post:  The Point of No Return

Unless the emissions fallacy is quickly rejected, it will be calamitous for humankind and the biosphere. The fixation on GHG emissions while ignoring their existing concentration levels means that global warming and ocean degradation will proceed virtually unchecked. Unfortunately the situation is even worse than this because the mainstream approach to emissions reductions is itself severely restricted. The overall result is that humankind’s response to the GHG-based emergencies is essentially zero – nothing at all. My aim in this post is to substantiate this startling claim.

To clarify, the term “mainstream” in this context refers to those who accept the science of climate change and who therefore oppose the denialism of many conservatives. My critique thus targets the liberal media (Guardian, New York Times, etc.), popular science magazines (New Scientist, Scientific American, etc.), and most climate scientists, progressives, and environmentalists. I don’t doubt anyone’s sincerity or commitment, but I do dismiss their position on GHGs as ill-founded and illogical.

I begin with a depiction of the recent CO2 concentration and its one-year increase by the average of 2 ppm: 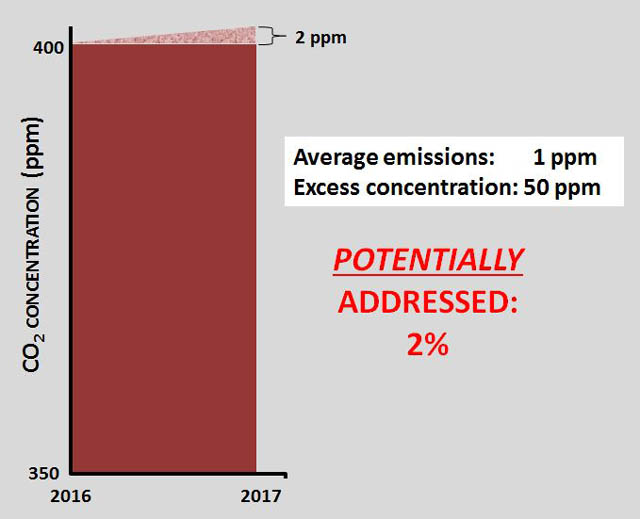 As in previous posts, I use CO2 as the representative GHG and assume that 350 ppm is the safe upper limit for its concentration. The year 2016 was chosen because this is when the CO2 level reached 400 ppm.

The increase from 400 ppm to 402 ppm during 2016 means that the average CO2 concentration for the year was 401 ppm. Because the environmental harm from GHGs is determined by their concentrations, the contribution from CO2 emissions during 2016 was 1/51, or just under 2%, of the total. Thus, even if all emissions had been eliminated, only 2% of the harm would have been negated. This, in a numerical nutshell, is the emissions fallacy.

Of course, CO2 emissions were far from eliminated in 2016. Globally, about 40 billion tons of CO2 were emitted from fossil fuels, cement production, and land-use changes. This figure has stabilized recently, but at a record-high level that continues to drive up the deadly CO2 concentration.

To understand why the current approach has failed to seriously tackle CO2 emissions, it’s necessary to understand what underlies their generation. As with all environmental impacts, there are three factors: population, per-capita consumption, and efficiencies. The first two determine an economy’s output rate – how much is annually produced and consumed. An increase in this rate is called economic growth, and it causes emissions to rise. Efficiencies refer to the emissions generated per unit of economic output. Increasing these will cause emissions to fall. With these facts in mind, let’s have a closer look at the CO2 emissions for 2016: 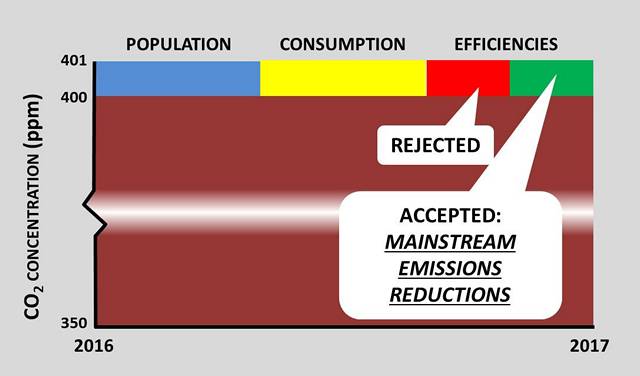 Here the year’s emissions are represented by an average concentration increase of 1 ppm, as noted above. This increase has been divided into the three contributing factors. Their equal division is an approximation that is sufficient for my argument. The efficiencies are further subdivided, but I’ll get to that later.

The critical point at this stage is that mainstream emissions reductions ignore the contributions of rising population and consumption levels to the CO2 increase. The IPCC, for example, while acknowledging these factors as major causes of increased emissions (Synthesis Report, p. 5), completely disregards them when discussing solutions. Most mainstream sources are even worse: population and consumption are not mentioned at all. The inevitable result is that only efficiencies are considered when policies are formulated or agreements are negotiated. This is like ignoring two of the three gaps in a broken dam: although one gap is slowly being plugged, water continues to rush unimpeded through the other two.

In the above diagram efficiencies are divided into “accepted” and “rejected”. This is because some efficiency measures would cut unacceptably into corporate profits. Such measures are automatically rejected unless substantial social pressure is brought to bear. Volkswagen found that cheating on diesel emission tests was more profitable than implementing stringent emission controls, so it cheated. Oil refineries and chemical plants have found that venting and flaring natural gas are more profitable than recovering it, so they vent and flare. This is an old story: in the absence of social compulsion, profits always override social costs.

If it is assumed that half of the potential efficiencies are rejected, then a revealing calculation can be made. The overall effectiveness of the mainstream approach in responding to the GHG-based emergencies is roughly 1/2 of 1/3 of 2%, or about 0.3%. The following diagram makes it visually clear just how insignificant this is: 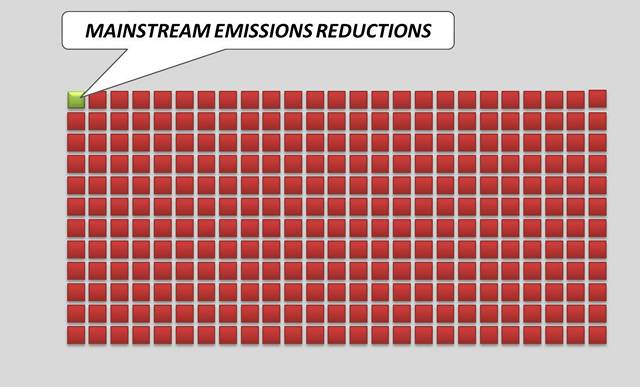 One can of course quibble with my numerical assumptions regarding efficiencies, but there is no doubt about the 2% associated with the emissions fallacy. This is a hard scientific fact, and it dominates the calculation. No matter how you slice it, mainstream emissions reductions address less than 1% of the CO2 concentration that is warming our planet and degrading its oceans.

In brief, then, NOTHING is really being done to address the GHG-based threats. Wind farms, solar panels, biomass, hydro power, tidal power, geothermal power, and nuclear power all inhabit that single green square above. The end of coal? Green square. Electric cars? Green square. A carbon tax? Yup – that’s in the green square too. The same applies to any measure that is restricted to improving efficiencies in an acceptable manner.

But this is not the end of the story. The mainstream emissions approach is just the culmination of a much deeper deception: what might be called the Great Crisis Reduction. The original, fundamental environmental problem is ecological overshoot – the concurrent violation of multiple natural limits due to economic over-expansion. It was overshoot that generated the excess GHGs, thereby spawning the climate and ocean emergencies.

Powerful social forces have gone to extraordinary lengths to trivialize the overshoot catastrophe in order to safeguard their economic privileges and political control. The first step was to split overshoot into its components and to treat these as discrete issues: habitat destruction, climate change, ocean warming, chemical toxification, etc. The second was to place the emphasis on climate change. Then came the unscientific fixation on emissions reductions as the solution to climate change. Next came the narrowing of this solution to efficiency improvements. Last, many of these improvements were rejected as economically unacceptable, often through the pretext of potential job losses. This sequence is depicted below, although the range in font sizes doesn’t adequately convey the true reduction extent: 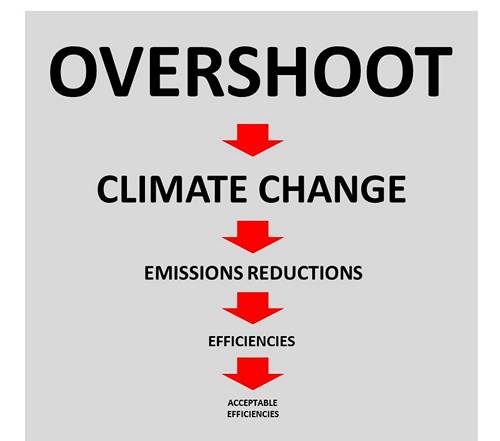 The Great Crisis Reduction has two alarming implications. The first is that we, the people, have been comprehensively deluded with respect to the ecological crisis. This is reflected in the almost universal acceptance of mainstream emissions reductions as effective “climate action” and sound environmental policy. The second is that those powerful forces have absolutely no interest in finding a solution. On the contrary, all the evidence indicates that they have decided to wallow in their privileges until the end.

NEXT Climate Science Post:  The Point of No Return