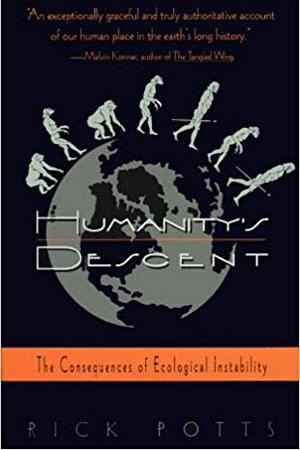 Anthropology's standard account of humankind's early development is the Savannah hypothesis.  This states that, as forests shrank in Africa several million years ago, our species emerged from the trees and adjusted to life in a relatively stable savannah environment by adopting bipedalism, tool-making, speech, complex social life, etc.  Potts, a paleoanthropologist at the Smithsonian, has concluded that this account is inaccurate and misleading.

Potts instead asserts that humankind's core attributes arose from environmental instability: the climatic and other alterations that produced a flexible, general-purpose brain capable of modifying its habitats to increase its survival chances.  This conclusion is highly significant for two reasons.  First, it helps explain why our species became globally dominant and is now globally destructive.  Although we are part of nature like other species, our unique evolutionary path means that we dangerously amplify natural shifts.  Second, it counters the standard story that humankind can respond to palpable and immediate threats like the proverbial "tiger in the bush", but not to subtle and long-term threats like the ecological crisis.  In fact, our evolved brain is fully capable of a rational crisis response, and the denial of this capacity is one of the great lies told by social leaders to avert fundamental change.

For an introduction to Potts' thesis about human evolution, see this video.

For excellent video descriptions of the Milankovitch cycles, which drive the Earth's changing climates, see here and here.

Other Recommended Books on the Ecological Crisis

A Case for Climate Engineering

A History of the Science and Politics of Climate Change

Storms of my Grandchildren