PREVIOUS Ecological Survival Post: Why Are We Existentially Threatened?

NEXT Ecological Survival Post:  A Rational GHG Strategy for the Young

Several decades ago the international community repeatedly vowed to safeguard the global environment for future humankind.  As today's young increasingly understand, these commitments have been comprehensively shattered.  Below I outline the key events, distorted science, and twisted logic that led to this hideous betrayal, which has recently taken the form of "net-zero emissions".  I then propose some essential steps the young must take to give them a chance at ecological survival.

In 1972 a United Nations conference on the state of the environment declared that, "... [humankind] bears a solemn responsibility to protect and improve the environment for present and future generations."

In 1988, when the UN General Assembly endorsed the creation of the Intergovernmental Panel on Climate Change (IPCC), it underscored this responsibility and pointed to the disastrous consequences of rising greenhouse gas (GHG) concentrations.

In 1992 the world's scientists added their voices to the escalating fears.  They warned that rising GHG concentrations could alter the climate on a global scale, causing "vast human misery" and allowing our planet to be "irretrievably mutilated".

Also in 1992, a core agreement called the UNFCCC committed the international community to, "... stabilization of greenhouse gas concentrations in the atmosphere at a level that would prevent dangerous anthropogenic interference with the climate system."

These are among the many official statements that promised to avoid unsafe GHG concentrations and to protect the natural world for future humankind.  But it is now 2020, so we know what actually happened: concentrations have risen to catastrophic levels, and the young face a perilous future.  This is particularly true for the 90% who live in the Global South and are thus far more vulnerable to environmental damage than their counterparts in the richer countries.

What is almost unimaginable is that, despite this shocking history, safe GHG concentrations are still being dismissed today.  Instead of belatedly adopting this rational goal, the target recently proposed by the IPCC is net-zero CO2 emissions by 2050.  Be ruthlessly objective for a minute and see what this implies.

The CO2 concentration is the current level of this gas in the atmosphere, like the water already sitting in a bathtub.  Emissions are the increases to this level, like the water flowing from the tap.  The proposed decrease in net emissions is like the tap slowly turning off - while the water continues to rise.  When the net-zero target is reached, the CO2 concentration will be at its peak level, just as the bathtub water will be at its highest point when the tap is finally closed.  The CO2 trajectory is depicted in the graph below. 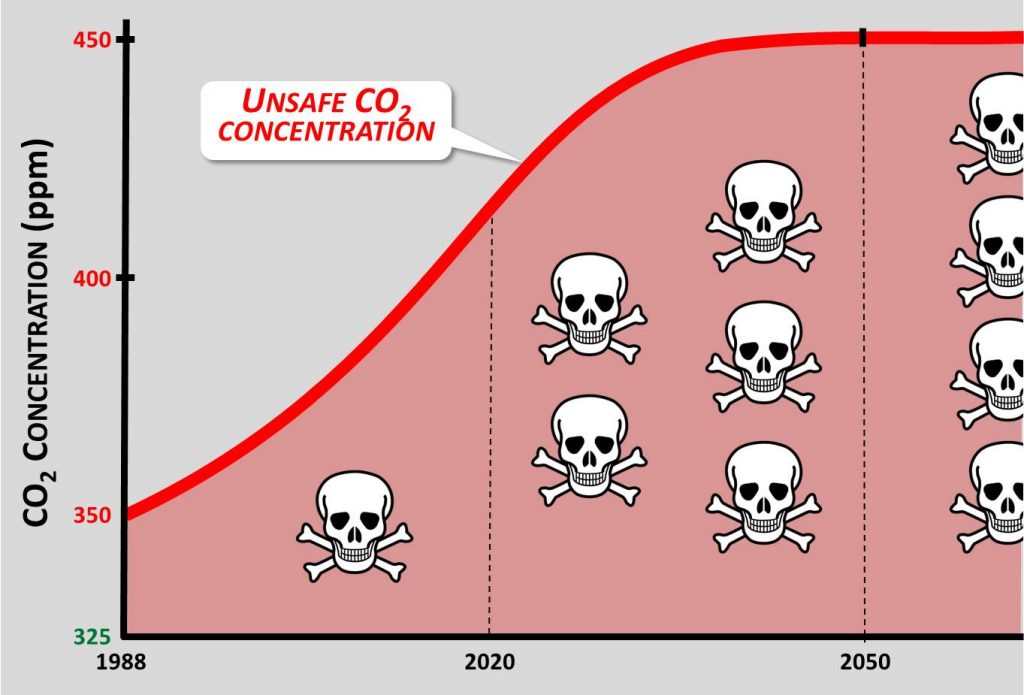 Figure 1: Net-zero emissions by 2050.  The shaded area represents immense ecological damage.  Consciously choosing this CO2 path, as is now being done, is therefore genocide of the young.

Here I assume that the safe CO2 concentration is 325 ppm, which is 16% above its pre-industrial level.  The curve traces the historical record from 1988, when the IPCC was formed, to 2020, when the concentration reached 415 ppm.  It then follows a trajectory that achieves net-zero emissions by 2050.  Note that the concentration continues to rise over this entire 30-year span.

A crucial climate fact is that a rise in GHG concentrations causes a roughly proportional rise in both the global temperature and the ensuing environmental damage.  Thus, when the CO2 concentration moves into unsafe territory, it will cause ecological damage to approximately the same extent.  Further, and critically, this damage will continue to accumulate so long as the concentration remains above its safe level.  The shaded area in the graph thus represents massive and ever-expanding ecological destruction that will undoubtedly reach tipping points and points of no return.  The skulls-and-crossbones indicate the suffering and mortality that will be inflicted on the young as a result.

This is genocide - "the deliberate killing of a large group of people."

How large?  The world's population will soon hit eight billion.  Half are young - under 30 years of age.  But each future birth will add another victim to the list, so this number will rise considerably.  Implementing the net-zero emissions target could therefore slaughter well over four billion innocent human beings, to say nothing of the non-human toll.  Given the unfathomable scope of this extermination, even the word "genocide" seems inadequate.

Let me briefly explain how this atrocity was orchestrated.  As indicated above, in 1992 the GHG problem was defined in terms of unsafe concentrations.  Three years later, in its second assessment report, the IPCC refused to specify unsafe GHG levels even though this was clearly within its scientific mandate.  Instead it shifted this crucial responsibility to non-scientific policymakers.  The organization also assumed, contrary to overwhelming environmental evidence, that unsafe concentrations had not yet been reached, and that their increases through net emissions could therefore continue.

These deadly pretenses have been maintained to the present day.  Policymakers are still responsible for setting unsafe concentration levels, although they never do.  And the IPCC still clings to the grotesque lie that a "carbon budget" exists to safely permit further net emissions. The international community has therefore reneged on its commitments to protect future generations and to avoid unsafe GHG concentrations.  For this unspeakable betrayal it must face the historical judgment of its primary victims: the young and future young.

Let me now address the young themselves - the living victims who must act for all.

Young people, shed your illusions - you have been ecologically abandoned.  Although many of your elders are environmentally concerned, virtually all have succumbed to the IPCC's deceitful distortions.  If you want a decent future on a livable planet, you will have to assert your strategic independence and kick some serious political ass.

What does this mean in more concrete terms?  First, you must decisively reject both the IPCC and its progressive supporters.  The IPCC is the standard-bearer for the falsified GHG story, as explained.  Progressive sources like The Guardian newspaper sympathetically cover environmental issues, but they embrace the net-zero travesty and are thus complicit in the fatal lies.  Progressive activists like Greta Thunberg have noble intentions, but they uncritically accept the IPCC's guidance.  The same is true for environmental groups like 350.org.

Second, you must seize the reins of history.  Ignore the nonsense about governments holding political power and recognize that power is firmly held by those who control the economy.  Unless this ecocidal group is replaced with a sustainable alternative, your world will soon be destroyed.  You must quickly learn the hard realities about capitalism and politics, and then act heroically on this basis.

PREVIOUS Ecological Survival Post: Why Are We Existentially Threatened?

NEXT Ecological Survival Post:  A Rational GHG Strategy for the Young