NEXT IPCC Critique Post:  My Demands for the IPCC's Sixth Assessment Report

As previously described in my posts, the IPCC has failed to rationally address the GHG crisis.  Like climate science as a whole, the organization uses poorly defined and conflated terms, illogically aims for reduced emissions instead of safe concentrations, lacks a valid ecological damage function, accepts a 2°C limit that has no scientific foundation, and marginalizes the only solution to global warming – geoengineering.

Sadly, the situation is even worse than this.  The IPCC freely admits that population and economic growth are major factors in driving GHG emissions, but fails to consider them when discussing solutions.  It therefore fixates on efficiency improvements as the sole means for emissions reductions.  Similarly, the organization has no trouble identifying tipping points and other “surprises” in the climate system when describing the GHG crisis, but blatantly disregards them when solutions are formulated.  As a result, the calamity currently unfolding in the Arctic is severely downplayed, and the solar radiation management (SRM) that might forestall a complete collapse is summarily dismissed.

This stunningly ineffective response is in part reflected in the Keeling curve, which tracks the atmospheric CO2 concentration over time: 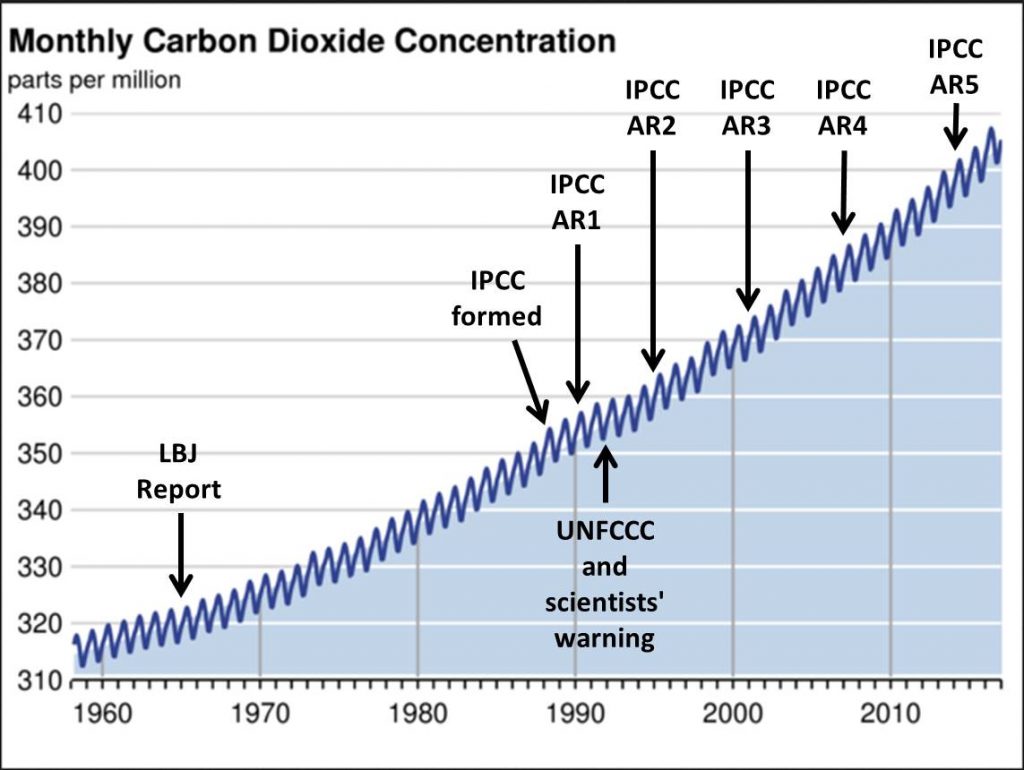 A glance at the graph shows that there has been no interruption to the rising CO2 trend despite the IPCC’s creation in 1988, the publication of its five Assessment Reports in the years shown, and the mitigation policies that resulted.  The curve flattened slightly in the 1990s, but as explained here this was due to an unusually large uptake of atmospheric carbon by land-based ecosystems.  Once this natural variation is taken into account the CO2 rise over this period was rapid and relentless.

These empirical results are in sharp contrast to the statements made in the 1992 UNFCCC agreement that initiated the IPCC-based process.  This document affirmed previous commitments regarding, “… protection of [the] global climate for present and future generations …”  It warned that rising GHG concentrations, “… may adversely affect natural ecosystems and humankind.”   Most importantly, it established the objective of limiting GHG concentrations so as to, “… prevent dangerous anthropogenic interference with the climate system.”

Neither aim has come close to being realized, and the warning has gone unheeded.  The global climate has been ravaged instead of being protected for future generations.  Natural ecosystems and humankind have been adversely affected in numerous devastating ways.  And GHG concentrations have soared far beyond any level that could reasonably be considered as dangerous.  Thus, based on the 1992 agreement, the IPCC has been a comprehensive failure.  The question I want to address here is: why?

To begin, it is necessary to step back and see the GHG crisis in its broad historical context.  After capitalism replaced feudalism in Europe starting around 1500, the global economy rapidly expanded.  As a result the Earth’s environment became increasingly stressed, and in the 1950s a critical point was reached when natural limits were violated.  This unprecedented event was ecological overshoot.  It notified our species that the economy had reached the end of its expansionary phase and must now contract in order to avoid environmental disaster.

One of the first indications of ecological overshoot was the increase in the atmosphere’s GHG concentrations during the 1950s, with CO2 shooting past its long-term maximum of 300 ppm.  This initiated global warming, which led to alarming changes in the climate system.  In the decades that followed it became evident that excess GHGs damaged not only the atmosphere, but the oceans as well.  These harmful effects, which are part of the overall GHG crisis, include the ocean’s warming, deoxygenation, and acidification.

Given this history, it is clear that the correct framing for the GHG crisis is to place it in the context of capitalism’s expansion and the resulting ecological overshoot.  Global warming and ocean degradation are extremely serious problems, but they are not the fundamental or underlying problem.  Neither was this problem caused by “human activities” in the abstract, as was claimed in many early reports.  Instead it was caused by the production and consumption activities of a specific economic system: capitalism.

One of the key implications of this framing is that the GHG crisis cannot be addressed in isolation.  It must instead be tackled as part of humankind’s effort to reverse the environment’s overshoot condition.   Its solution, in other words, is tightly coupled with the contraction of the global economy.

At this point the issue becomes intensely political because contraction is incompatible with the capitalist system.  Such economies are inherently expansionary, which means they are compelled to grow.  Continued growth, however, destroys the environmental conditions on which they depend.   What this means is that capitalism in the 1950s had reached a historical dead end: it could neither contract nor long continue its expansion.  Given this unsolvable dilemma, the momentous decision was made to continue with business-as-usual (BAU) despite the severe ecological damage that would inevitably ensue.

The supporters of BAU were then faced with a vexing problem: how to conceal their decision and its gruesome implications from the rest of society.  Somehow the populace, and especially its concerned intellectuals, had to be persuaded that the environment was being effectively managed despite the escalating evidence to the contrary.  Solving this problem was an urgent necessity because the likely alternative was a level of social anger that could destabilize the capitalist project.

The creation of the IPCC was an indispensable part of the chosen solution.  On behalf of the BAU supporters the organization assumed two important tasks: to reinforce the superficial framing that dissociates the GHG crisis from overshoot, and to restrict proposed solutions to those that safeguard the capitalist system and its continued expansion.  The organization was effusively hailed as objective and authoritative in order to facilitate this mission.

The deceptive framing was reinforced by preventing the idea of ecological overshoot from entering the public mind.  This was achieved by identifying climate change as the core environmental issue, thereby focusing attention on a single aspect of the far wider problem set.  Overshoot was thus reduced in scope, and climate change was isolated from the other overshoot components: habitat destruction, chemical toxification, etc.  The apparent hope was that, if overshoot is diminished, fragmented, and unnamed, it won’t be recognized as a distinct historical event that might be attributed to capitalist expansion.

The solutions were restricted through a different kind of scope reduction.  From the full range of approaches available to tackle the GHG crisis, the IPCC dismissed or ignored any that posed a systemic threat.  Let me substantiate this by identifying the solution possibilities and then explaining how they were filtered by the IPCC. 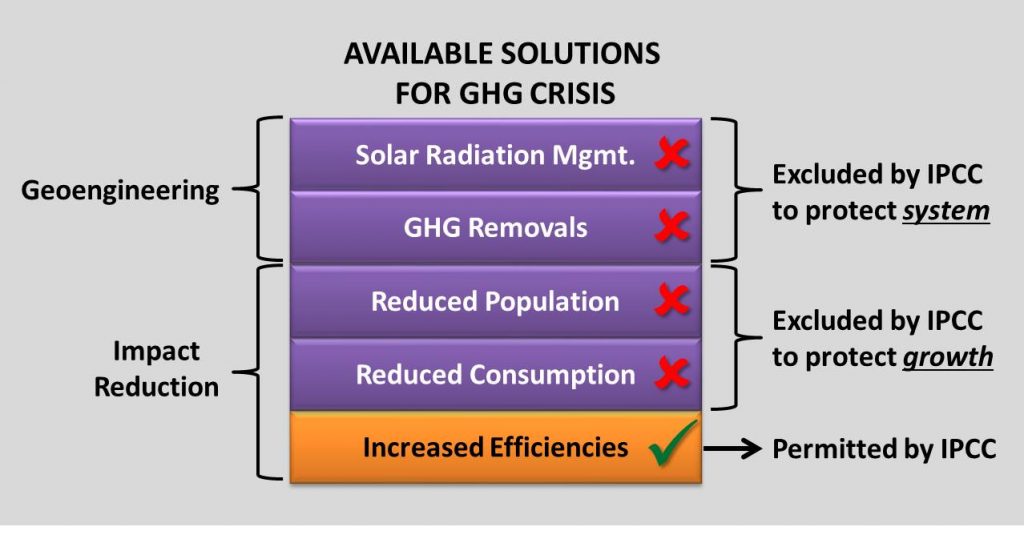 As shown in the above diagram, five broad solutions to the GHG crisis are available.  To deal with existing concentrations there are the two sides of geoengineering: SRM to tackle emergencies such as the melting Arctic and GHG removals to reach safe concentration levels.  To reduce emissions there are the three impact reduction factors: reduced population, reduced consumption, and increased efficiencies.

The IPCC has consistently marginalized geoengineering, for two main reasons.  The first is that, for the BAU supporters, its wholesale adoption would be an implicit admission that the GHG crisis is real and serious.  This would constitute a humiliating surrender to the environmentally concerned and an invitation to strict government regulation.  Second and more importantly, large-scale interventions in the environment might expose the fact that capitalism has transgressed planetary boundaries and caused widespread ecological damage.  This could undermine public confidence in the system, thereby jeopardizing its future.

Regarding emissions, population and consumption growth are the two drivers of economic expansion, so a growth-dependent economy can reduce neither without causing severe economic dislocations.  Such reductions are therefore completely unacceptable to BAU supporters.  Efficiencies, on the other hand, are to some degree compatible with capitalist logic.  This is why they are so strongly emphasized by the IPCC: they do curtail emissions to some extent, and they don’t impede economic growth.  Improved efficiencies are thus the perfect substitute for an effective emission reduction program.

The IPCC’s moral justification for continued growth is that it reduces global poverty though “sustainable development.”  This approach, however, is inapplicable to the current situation.  Under ecological overshoot there is no sustainability – that’s what overshoot means.  The term is thus an oxymoron and cannot serve as the basis for rational action.  What is required instead is equitable contraction: serving the needs of the poor while the global economy shrinks to a sustainable size.

What the above implies is that the IPCC’s failures to bend the Keeling curve downward and to spur SRM in the Arctic are not accidents, but rather the inevitable results of its economic mandate.  Contrary to its reputation as a staunch defender of the global environment, the organization is an effective instrument of social control.

This conclusion may strike the reader as extreme, but it is consistent with the views of a conventional historian of physics.  When discussing the IPCC’s formation in The Discovery of Global Warming (2008), Spencer Weart notes that the BAU supporters, “… might have been expected to oppose the creation of a prestigious body to study climate change.”  But, he explains, “… they distrusted still more the system of international panels of independent scientists that had been driving the issue.  If the process continued in the same fashion, … future groups might make radical environmental pronouncements.  Better to form a new system under the control of government representatives.”  (p. 158)  Those government representatives, of course, are strongly tied to the supporters of business-as-usual.

My overall conclusion is that a rational response to the GHG crisis was never seriously considered.  The 1992 statements were intended solely to placate the public and concerned thinkers.  The IPCC’s fundamental role has been to mask this existential abdication through the above stratagems and the luster of its research on the GHG problems.

NEXT IPCC Critique Post:  My Demands for the IPCC's Sixth Assessment Report