The IPCC long ago abandoned the original, scientifically sound strategy of reducing GHG concentrations to their safe levels.  It is now fixated on reducing emissions – the increments to the problem rather than the problem itself – in order to keep the global temperature rise below a specified target.  Its recent report, Global Warming of 1.5°C, is the latest example of this emissions fallacy.  Although the report proposes a decrease in the temperature limit from 2°C to 1.5°C, this retains the false strategy and is far from sufficient to prevent ecological collapse.

An obvious question arises: WHY would the IPCC make this ecocidal shift?  Why would this organization, which was entrusted with one of the most consequential tasks in history, throw science and logic out the window and drive humankind towards an extinction-level catastrophe?  The answer, in brief, is that the concentrations-based approach is incompatible with the capitalist world.  Proposing it was either a mistake that had to be quickly rectified, or a deliberate stratagem to placate the concerned before the IPCC-based process was shunted onto a system-friendly path.

To expand on this answer, imagine that the concentrations-based approach had been embraced and implemented.  The first step would have been to establish safe GHG levels.  For CO2, the IPCC would likely have chosen 350 ppm, which was reached in the late 1980s when the organization was founded.  The critical implication would have been that no carbon budget exists for future emissions.  This means that, unless large-scale measures were immediately introduced for removing excess GHGs from the atmosphere, economic activities would have to be severely curtailed.  However, such economic contraction violates capitalism’s expansionary logic, is hostile to powerful social forces, and is contrary to the material interests of the global rich.

What we have seen since then are incremental steps in the IPCC’s escape from the safe-concentrations approach.  The first of these was truly ludicrous: the IPCC in its second Assessment Report (1995) insisted that the determination of safe GHG levels is not a scientific issue, but must instead be left to policymakers.  As explained more fully here, no social reasoning could possibly link rising GHG levels to the initiation of dangerous environmental effects, whereas the scientific reasoning is straightforward.  In skirting this issue the IPCC therefore abdicated a core scientific responsibility.

The second step in this sequence was to replace the safe concentrations target with the 2°C temperature limit.  This allowed the IPCC to tell a superficially credible story.  With the 350 ppm limit no such story exists – there is only escalating failure as the CO2 concentration rises to 360 ppm, then to 370 ppm, etc.  With the 2°C temperature threshold, on the other hand, the IPCC could spin a tale: this temperature hasn’t yet been reached, a carbon budget therefore exists to permit continued economic growth, and if we try really hard to reduce our emissions (“clean energy!”) we have a chance of staying below the warming limit.

This story was a great success and was duly employed for several decades.  Then the polar ice caps started to visibly melt, the weather took a nasty turn, and the wretched of the earth began to flee their ravaged lands.  Concerns mounted steeply, so a new story was required.  This was the third step: the 1.5°C report.  We are now being told that – oopsie! – 2°C was too high, so the temperature limit must be lowered.  Luckily, however, the carbon budget is still there, so we rich folks can continue to burn those wonderful fuels and expand our grossly inflated economies.

The next fabricated story, which will likely be the last one required before collapse becomes inevitable, is already in the pipeline.  A recent article in Scientific American suggests that carbon budgets may not be promoting sound climate policies, so a replacement is needed.  This will be based on the key idea in the 1.5°C report: a timeline for reaching “net-zero”.  The reader should thus be prepared for fervent rallying cries such as “net-zero by 2050!” or “net-zero by 2040!”  Such effusions will mask the fact that the target refers to emissions rather than concentrations.  Yet again, the IPCC and its supporters will have evaded the existential necessity to return the atmosphere to safe concentration levels.  Yet again, humankind and nature will weep.

There are growing indications that the horrific truth about the official GHG story is starting to penetrate public awareness.  The 1.5°C report, which was clearly intended to buttress the story’s faltering credibility, has generated a surprising range of responses.  Besides the wholehearted support of the true believers (see here, here, and here) there have been alarmed cries about downplayed tipping points, the extreme dangers of a 1.5°C temperature rise, and the implausibly rapid change required to stay under the new limit.

As part of this ferment, the environmentally concerned appear to be splitting into three groups.  Because such a split could have major political implications, I would like to discuss it with reference to the diagram below. 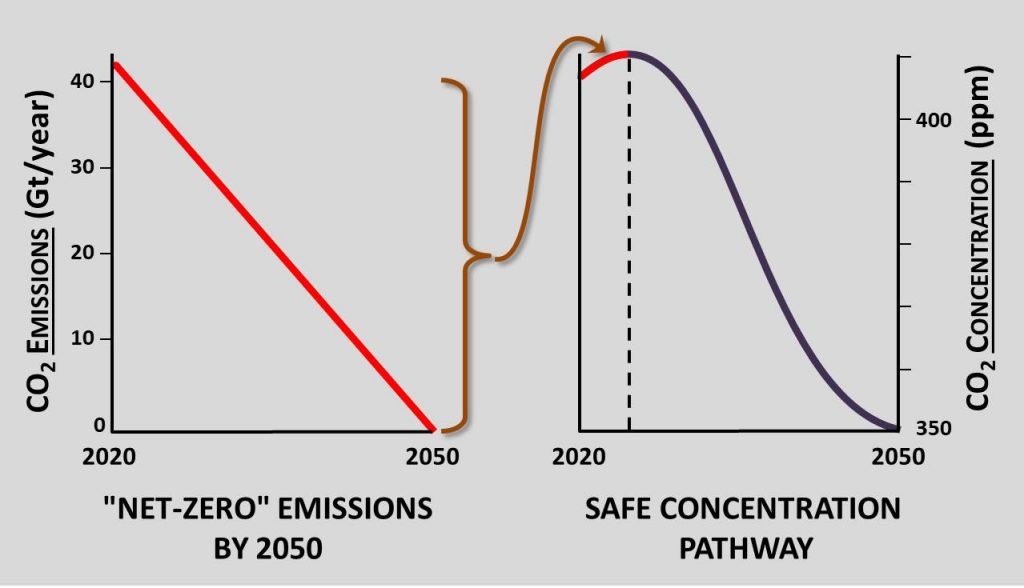 As in my previous post, CO2 is used here as a proxy for the overall GHG concentration.  The graph at left depicts the solution proposed in the 1.5°C report – a reduction in net CO2 emissions from the present 42 gigatons per year to zero by 2050.  The graph at right depicts the rejected safe concentrations approach – a reduction in the CO2 level from the present 407 ppm to 350 ppm by 2050.  The brace and arrow in the center indicate that “net-zero” stabilizes the concentration at its peak, but doesn’t reduce it.

The three groups I have in mind are the following:

The capitalist fantasists. This group already exists and is by far the most numerous. Its members believe that, given advanced technology and sufficient “political will”, the proposed reduction in CO2 emissions can be achieved within the prevailing order.  The fantasists are strongly committed to capitalism and see the IPCC as objective and authoritative.  The group includes most climate scientists, progressives, and environmentalists, as well as the hyper-deluded, growth-obsessed proponents of a “new climate economy“.

The capitalist realists. The realist group is just now beginning to form, in part as a reaction to the 1.5°C report. Its members remain committed to capitalism.  However, when they examine the left graph above and this diagram in the report they fail to see how such an extraordinary reversal of the CO2 emission trend could be accomplished.  Efficiencies would have to increase far beyond any precedent, and this would require an exertion of political will that can scarcely be imagined.  They simply don’t buy it.

The post-capitalists. The last group, which is also in its embryonic stage, consists of those who acknowledge the validity of the safe concentrations pathway. They understand that the implausible emission reductions must be accomplished not in thirty years, but in less than ten (see dashed line).  This is not just unprecedented, it is beyond the bounds of rational contemplation.  Further, CO2 removals on a scale at least a hundred times greater than anything currently envisaged will then be required to decrease the concentration to 350 ppm.  Their conclusion is that these goals can be achieved only by a post-capitalist economy that is embedded in a post-capitalist social order.

As a full-blown ecological disaster draws ever nearer, each of these groups faces burning questions.

For the capitalist fantasists the key question is this: how long can you maintain the pretense that “net-zero” emissions can be achieved by expansionary economies that are increasingly led by anti-environment zealots?  At what point do you become indistinguishable from the climate deniers in rejecting the overwhelming evidence and twisting simple logic for your narrow purposes?

The capitalist realists face a different question: you talk the talk, but can you walk the walk?  You say that a CO2 solution is impossible under capitalism, so what do you propose?  Will you passively remain with the system and go down with the ship, or will you summon your courage and seek a replacement?  Which side are you really on?

Perhaps the most difficult question of all must be answered by the post-capitalists, of whom I am one.  How will we overcome the deeply entrenched, technologically advanced, and ruthlessly efficient political power that stands between capitalism and a sustainable economy?  How, in other words, can we spur the revolutionary change that is now essential for human survival?

In my view the ecological future of our species will be determined by the evolution of these groups and the collective struggle of the concerned against the deniers and the unconcerned.