In my last seven posts, starting with Nature's Mortal Wound, I examined various aspects of the ecological crisis.  My main aim was to dispel the myths and misconceptions that frequently muddle our thinking on this crucial topic.  Here I summarize my views regarding the true nature of humankind's existential predicament.

Since the start of the Industrial Revolution humankind has expanded its economic activities well beyond the biosphere's capacity to absorb the resulting environmental impacts.  This over-expansion first became evident in the 1950s, when the atmosphere's CO2 concentration exploded beyond its long-term maximum of 300 ppm.  Numerous other instances of severe environmental degradation soon followed.  This wide-ranging violation of natural limits is the fundamental, underlying cause of the ecological crisis.  It is referred to here as ecological overshoot or just overshoot. 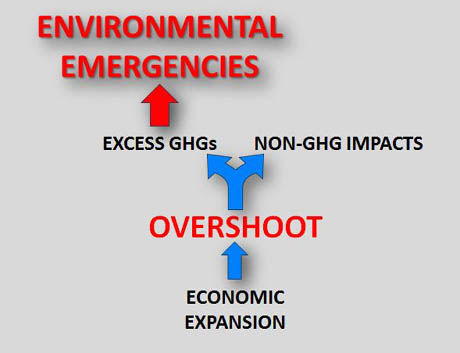 As shown in the diagram above, overshoot has impacted the global environment in two distinct ways.  In the first category are excess greenhouse gases (GHGs).  In recent decades these have devastated the environment through climate change and the warming, deoxygenation, and acidification of the global ocean.  These harms could soon trigger tipping points and lead to one or more points of no return (PONRs).  They must therefore be treated as environmental emergencies and given the highest priority when formulating a strategic response.

In the second category are the impacts that are largely or entirely independent of GHGs.  These include habitat destruction, species extinctions, chemical and radiological toxification, plastic-ridden oceans, and pollution-choked cities.  These impacts are highly destructive, but they are unlikely to trigger tipping points in the near future and can therefore be treated on a non-emergency basis.

An important fact about the ecological crisis is that, although it was caused by economic expansion, it cannot be entirely solved by economic contraction.  The latter would have sufficed if humankind had caused only minor damage to the biosphere, thereby allowing natural processes to make the repairs.  However, because we have inflicted profound and widespread damage, the natural world will continue to degrade without our active intervention.  This is why geoengineering, despite its costs and risks, is now unavoidable.

Another important fact about the crisis is that the GHG-based emergencies are the results of rising GHG concentrations, not their current emissions.  The main greenhouse gas, CO2, remains in the atmosphere for hundreds of years, so it accumulates.  Today we are experiencing the warming effects of gases that spewed from tailpipes and chimneys when Elvis Presley was still gyrating his hips.  The fixation on current GHG emissions while ignoring their accumulated concentrations is here called the emissions fallacy.  This pervasive error severely distorts our perception of the crisis and prevents the formulation of a rational plan for ecological survival.

One might think that a focus on emissions would lead to highly effective emissions reductions, but this is not the case.  Although such reductions could be achieved by sharply decreasing population and consumption levels, these measures are never contemplated.  As will be explained in future posts, such decreases would clash with capitalist logic, and - as several thinkers have observed - it's easier to imagine the end of the world than the end of capitalism.   With these solutions off the table, all that remains are improved efficiencies.  However, these are implemented only when they are profitable or socially enforced.  The overall result is mainstream emissions reductions, which address less than 1% of the GHG concentrations now ravaging the biosphere.

By far the most significant aspect of the ecological crisis is its urgency.  Tipping points have likely been reached in the Arctic, with irreversible and possibly extinction-level events just around the corner.  If humankind is to survive, immediate action is needed to tackle the climate and ocean emergencies, and rapid intellectual development is required to establish the economic and political foundations for a sustainable society.  It is therefore inexpressibly tragic that this urgency is being systematically suppressed.  Like airplane pilots struggling with a fatal defect while reassuring their passengers, conventional voices are massively downplaying the severity of our predicament.  This is not a white lie to provide comfort, but a cruel falsehood to prolong power and privileges.

And this is what the ecological crisis finally comes down to: beyond an immense tragedy, it's an ethical abomination.  Those in power fully understand what is happening to our planet.  They have chosen to disorient us with environmental fairy tales and to generously reward those who peddle them.  They have chosen to avoid a meaningful response as life on Earth is slowly extinguished.  The true essence of the crisis is thus the unwillingness of a ruling class to either solve the problems or to step aside and let others make the attempt.  We are witnessing a powerful group commit suicide under luxurious conditions while billions of people and millions of species expire as collateral damage.  It's that simple, that brutal, and that final.

To recap: The ecological crisis is rooted in humankind's expanding economic activities, which resulted in overshoot starting in the 1950s.  Environmental impacts driven by excess GHGs could soon trigger tipping points and even reach PONRs.  They must therefore be tackled with geoengineering and aggressive emissions reductions on an emergency basis.  The other impacts are less destructive in the short term and can be addressed at a lower priority.  Powerful interests have deeply confused the environmentally concerned by disseminating the emissions fallacy.  They have also restricted emissions reductions to the mainstream approach and suppressed the urgency of decisive action.  Finally, they have chosen to avoid such action and to languish in comfort until their own inevitable demise.